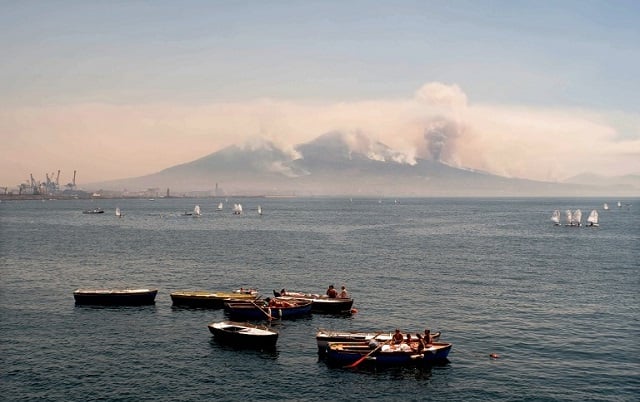 Saviano, a mafia journalist and author, said he believed the fires at the Campanian national park were orchestrated by criminal organizations.

In a video published to his Facebook page, he outlined his hypothesis that the fires were either started in order to burn rubbish dumped in illegal landfill sites in the area, or to block construction projects on the land.

Four Italian army patrols were on Thursday supporting the hundreds of firefighters and Civil Protection Agency workers and volunteers tackling the fire. Dozens of residents have been evacuated from their homes, and tourists have also been forced to leave at-risk hotels and restaurants.

Both public prosecutors and police have said they believe the fire was started by arsonists, though the high temperatures following months of lower than average rainfall allowed it to spread quickly.

One of the suspected culprits was on Thursday being questioned by police after being captured on CCTV footage, La Repubblica di Napoli reported.

“Arsonists are criminal idiots,” said Environment Minister Gian Luca Galletti, who expressed his solidarity with the communities near Vesuvius and the other areas affected by fires.

Environmental crimes should be punished with “more than 20 years in jail”, Galletti added. Tourists walk along Naples Promenade as smoke billows from the volcano behind. Photo: AFP

He said that “those who, thinking they can act with impunity, have decided to destroy the environment, have placed themselves outside God's grace and in mortal sin,” he said.

The fires have already destroyed several hectares of vegetation, including parts of the Cratere degli Astroni, a volcanic crater and nature reserve close to Naples.

The area is “the last remnant of the ancient forest that used to cover Naples”, according to WWF Italia, and is one of Naples municipality's few natural spaces.

Across Italy as a whole, vast areas of farmland and forest have been destroyed by the fires in recent days, with Italy's fire service tackling hundreds of wildfires every day.

READ MORE: Dozens of animals killed, farms destroyed after a weekend of fires across Sicily