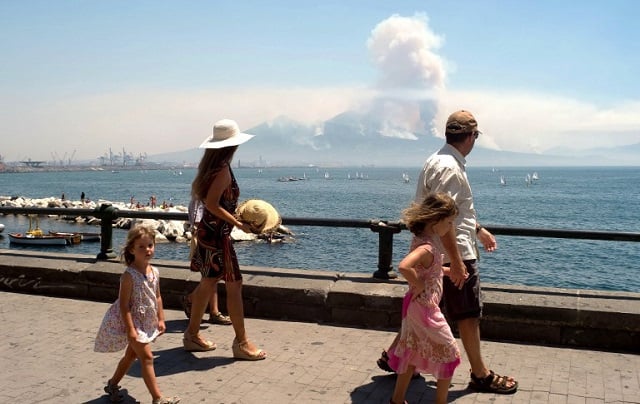 A family walks along Naples Promenade as smoke billows from Vesuvius. Photo: AFP

On Wednesday morning, the national fire service said it was involved in 441 operations across the country, including 288 wildfires, of which those at Vesuvius were among the most serious.

Clouds of smoke rose two kilometres into the air, visible from Pompeii, Naples, and Sorrento.

READ MORE: Huge blaze at Mount Vesuvius as fires continue to rage across the country

The photos below show the extent of the blaze, which many observers compared to a volcanic eruption in terms of the amount of smoke. Smoke rising from the slopes of Vesuvius, which has brought ash into many neighbouring towns. Photo: AFP Pedestrians walking past an ancient gateway with Vesuvius in the background. Photo: AFP People relax on boats as the fire continues in the distance. Photo: AFP Police said on Thursday that they believed the fires were caused by arsonists. Photo: AFP Italy's Environment Minister has called for those responsible for the blaze to be jailed for “more than 20 years”. Photo: AFP An aerial view shows that there were several distinct fires around the volcano. Photo: Gianluca Carpino Firefighters had been tackling wildfires close to the volcano for several days, but on Tuesday high temperatures and wind allowed two fires to join, making the situation significantly more serious. Photo: Robert Pearce A total of 70 firefighters and three helicopters were involved in tackling the blaze on Friday morning. Photo: Jonathan Hill/The Local Authorities said on Wednesday they believed arsonists were responsible for the blaze. Photo: Stefano Pietrini A view of the smoke from Herculaneum. Photo: Robert Pearce The clouds were also visible from the ruins of Pompeii, the ancient city destroyed by an eruption from the volcano in 79 AD. Photo: Massimo Osanna Another perspective of the clouds over Pompeii. The volcano has not erupted since 1944. Photo: Marco/Meteorologo777


Smoke clouds visible from Agropoli in Salerno, about 70km away. Photo: Mark Darwell

READ ALSO: Italy puzzles over how to save 700,000 people from wrath of Vesuvius This was the view from the cockpit of one of the Canadair aircrafts, which tackled the blaze by dropping water on the flames from above. The image clearly shows the distinct wildfires around the volcano. Photo: Michele Smoke has spread across the entire area, leading to fears of problems related to smoke inhalation. Photo: Jon Brent