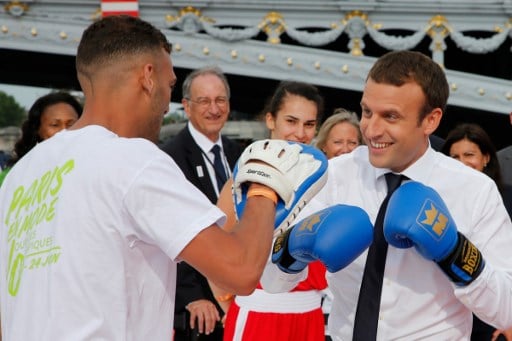 Macron spars with a boxer during an event to promote the Olympic bid in Paris in June. Photo: Jean-Paul Pelissier/Pool/AFP
Macron will spend Monday to Wednesday in the so-called Olympic city, where the IOC is based, in order to present the French capital’s bid to IOC president Thomas Bach on Tuesday.
He will be accompanied by the mayor of Paris, Anne Hidalgo, French sports minister Laura Flessel and the president of the Ile-de-France region, Valérie Pécresse, reported La Tribune de Genève.
The paper said Macron is likely to stay in the Beau-Rivage Palace hotel at Ouchy – one of Lausanne’s most prestigious hotels – where Bach and Lausanne officials will hold a dinner on Monday night.
The visit comes as the IOC prepares to approve changing the rules for the bidding process to allow the awarding of the 2024 and 2028 Games at the same time.
Only Paris and Los Angeles are still in the running to hold the 2024 Games after Budapest and Rome pulled out.
The IOC has praised both cities, with Bach saying they did not want to turn away either.
As a result, in an extraordinary session to be held on Tuesday the IOC is likely to approve the awarding of two Games at the same time.
However the final decision on which city gets which Games won’t be made until the IOC congress in Lima in September.
Macron will not meet with the Swiss government during his visit. Swiss president Doris Leuthard is set to visit Paris for her first meeting with Macron on July 18th, according to Swiss media.
READ ALSO: Sion ready to be Switzerland's official bid for the 2026 winter Olympics