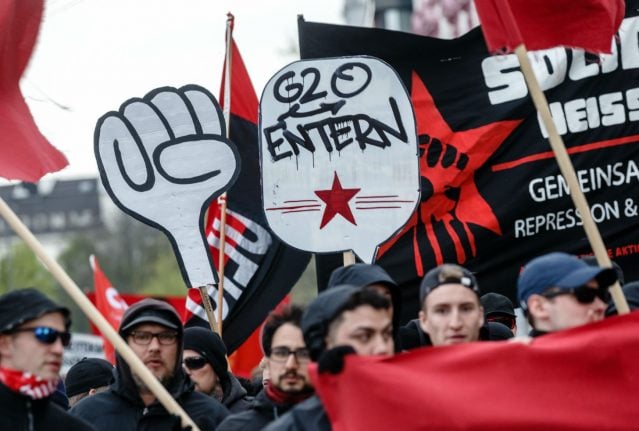 A May 1st Demonstration in Hamburg. Photo: DPA

“Capitalism will end anyway – you decide when!” reads a banner atop the Rote Flora, a former vacant theatre that was occupied by squatters in 1989 in the midst of demonstrations and street battles.

It has since become an alternative cultural centre and spiritual home for protesters against war, nuclear power, climate change, racism, big business and the gentrification of the now hip Sternschanze district around it.

In most years since, especially on May 1st Labour Days, black-clad youths with hoodies and balaclavas have hurled rocks and fireworks at armoured riot police who have responded with batons, pepper spray and water cannon.

The rowdy annual ritual tends to end with several burning cars and smashed shop windows, which the stiff-lipped citizens of the wealthy northern port have more or less learnt to live with.

But this year promises to be far hotter than most, with the world leaders of the Group of 20 big industrialised and emerging economies coming to town on July 7th-8th.

Chancellor Angela Merkel has invited the leaders to the city of her birth, among them US President Donald Trump, Russia's Vladimir Putin and Turkey's Recep Tayyip Erdogan.

Posters and stickers covering the Rote Flora and walls in cities across Germany have for months rallied demonstrators to “Shut down” or “Smash the G20”, with 30 demonstrations announced in the summit week starting Sunday.

“Welcome to hell” is the eye-catching motto of one of the rallies seen as likely to escalate, organised for July 6th by veteran Rote Flora activist Andreas Blechschmidt.

“It's a combative message … but it's also meant to symbolise that G20 policies worldwide are responsible for hellish conditions like hunger, war and the climate disaster,” he told AFP.

Blechschmidt said activists would seek to blockade access to the summit venue and, as usual, “reserve for themselves the option of militant resistance” against police.

Organisers expect a peak of over 100,000 demonstrators, while police estimate a hard core of 8,000 left-wing extremists considered likely to use violence.

“It will be the biggest operation in the history of Hamburg's police,” said police spokesman Timo Zell.

About 20,000 officers will secure Germany's second city and the summit venues, a conference centre and the harbourside concert hall, the Elbphilharmonie.

A holding centre for detainees has been set up with space for 400 people and detention judges on hand.

Police will need to secure road convoys from the airport to the city centre, including the US motorcade with its scores of vehicles.

Police have warned protesters who may be thinking of a sit-in in front of Trump's armoured presidential limousine known as “The Beast” that it may not stop.

Border controls have been reimposed since mid-June at crossings to nearby Denmark and other neighbours after protest organisers mobilised across Europe and beyond.

Many Hamburg residents are fleeing town to evade traffic jams, ID checks and the noise of police helicopters above, and some shops near the summit are boarding up their windows.

Protesters have voiced anger about the city turning into a police “fortress”, and at a July 7-8 ban on demonstrations across most of the city which will force rallies into harbourside areas.

Georg Ismael, 25, of leftist group ArbeiterInnenMacht, said that given how police “are trying to put pressure on the organisations mobilising against the G20, you can expect them to be violent”.

“We are prepared and we'll try to defend our democratic rights to assemble.”

Many fear a rerun of the kind of major urban clashes seen at the 2001 G8 summit in Genoa, or the Frankfurt opening of the new European Central Bank building in 2015.

So why has Germany chosen the centre of a large city after most recent world summits were held in secluded spots, such as the G7 at the Bavarian Alpine retreat of Elmau?

Germany says it wants to signal transparency at a time when politicians are accused of hiding away, and host the meeting in a port city that prides itself as the country's “gateway to the world”.

Another reason is logistics: with over 10,000 delegates and almost 5,000 journalists expected, no German town, castle, resort or cruise ship could host the mega-event.

The government hopes the summit will be a success, but it fully expects police lights and water cannon or, as one official put it, a summit that will be “blue and wet”.