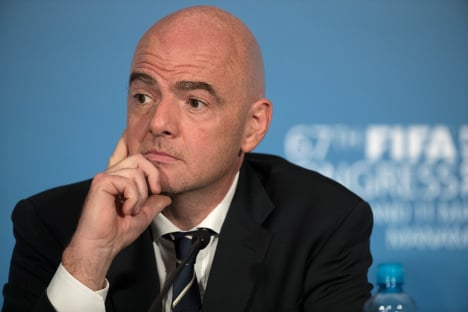 “We are facing a diplomatic crisis,” Infantino told Switzerland's Le Matin Dimanche newspaper. “I am confident the region will return to a normal situation.”

He told the paper Fifa was “closely watching the evolving situation and we are in regular contact with the highest authorities in Qatar.”

But he stressed that Qatar's World Cup was five years away.

“Obviously, if football can offer a small contribution to improve the situation, I won't hesitate to offer my help,” he said, while adding that Fifa should stay clear of “geopolitics.”

Saudi Arabia and allies including the UAE and Bahrain cut diplomatic ties with Qatar on Monday, accusing it of supporting extremism.

The move triggered the most serious diplomatic flap to hit the region in years and experts have said it could impact the 2022 World Cup.

Since being controversially chosen by Fifa in 2010 as the host, Qatar has maintained that it is a politically secure nation despite its location in a volatile region.

Doha has also emphasised that the tournament serves the entire Gulf, and not just the tiny gas-rich emirate.

Those claims have faced fresh scrutiny during the crisis, possibly invigorating a campaign by critics of Qatar to strip Doha of the tournament.