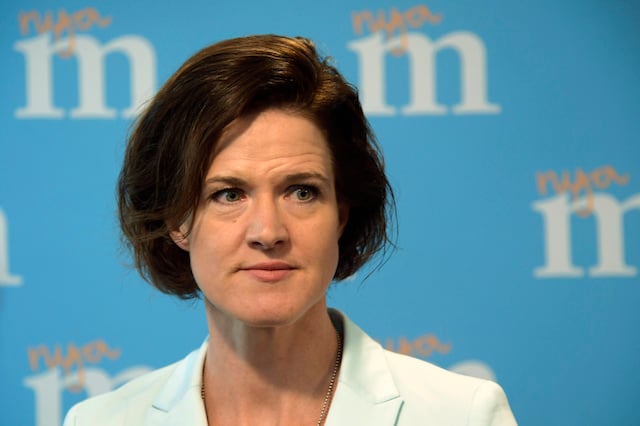 Moderate Party Leader Anna Kinberg Batra. Photo: Anders Wiklund/TT
The Moderate Party leader has faced heavy criticism in the past few months with the party polling worse than ever.
A fresh opinion poll from Statistics Sweden on Thursday suggested that the party had been overtaken by the anti-immigration Sweden Democrats as Sweden's second-largest political party.
“I am in the midst of a crisis of confidence, as are we as a party,” Kinberg Batra said.
On Friday, Kinberg Batra announced she was replacing the party's spokesperson on legal affairs, Beatrice Ask, previously justice minister. Ask will be replaced by party secretary Tomas Tobé.
Earlier this week, two Swedish newspapers reported that strong voices within the Moderates were calling for Kinberg Batra to be replaced before the 2018 election.
The criticism began after the party leader announced in January that she would be prepared to enter into talks with the anti-immigration Sweden Democrats, in an attempt to put pressure on the Swedish government.
The move backfired, resulting in dwindling voter support, and questions being raised about what the party actually stands for.
“We have been criticised for being vague, both me and us as a party. It is not really that strange that we as a party have been criticised in that way, as we have been reassessing several policy areas. It takes time before it becomes clear what we stand for now. And I have not been as sharp in my role as I think I ought to be,” Kinberg Batra said.
ANALYSIS: Could crisis in the opposition bring a new political climate in Sweden?
She said she did not regret the approach towards the Sweden Democrats, however, repeating her previous stance that she believed in having discussions with all parties in the Riksdag.
Kinberg Batra did not issue any criticism against Tobé or Ask, whose replacements will be announced later.
Despite the internal criticism, the Moderate Party as a whole backs Kinberg Batra, who will remain in her leadership position. Liberal Party Leader Jan Björklund and Birgitta Ohlsson. File photo: Henrik Montgomery/TT
Meanwhile, another party leader in the centre-right Alliance (the Moderates, Liberals, Centre and Christian Democrats) is  facing an internal struggle.
READ ALSO: Four budget proposals from Sweden opposition
Jan Björklund, leader of the Liberal Party, has been challenged for the leadership by Birgitta Ohlsson, a prominent party member who often votes against the Liberals' offical stance in the Riksdag. Previously Sweden's EU minister in the Alliance government, Ohlsson's social-liberal leanings and her focus on gender equality have made her popular with the public.
Björklund warned, however, against a battle over the party leadership on Friday.
“This is now a choice we have to make: Are we to spend six months on personal issues, or on discussing the new politics we are to meet voters with?,” he asked.
Url copied to clipboard!