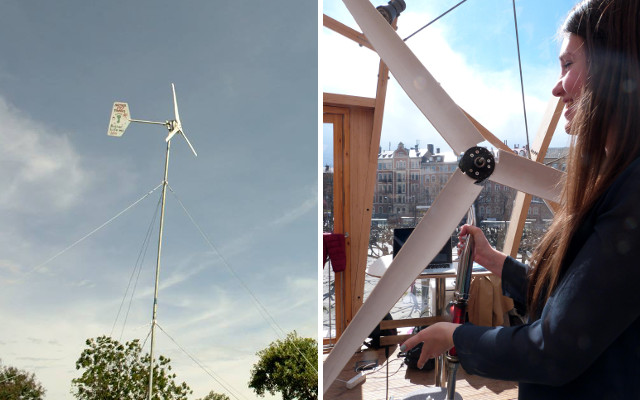 A similar turbine in use (left) and the Stockholm prototype. Photo: Engineers Without Borders Stockholm

For several months the Royal Institute of Technology (KTH) chapter of Engineers Without Borders has been hand building a compact wind turbine prototype, and will soon build a similar one in Tanzania in order to provide power for a school there.

Access to electricity in the African nation is only 36 percent meaning more than 30 million people live without power, so the project hopes that harnessing the region's great wind power potential through small scale affordable turbines can change that for isolated rural communities in particular.

“There are initiatives but they mainly focus on bigger cities in a way to stimulate economic growth, and the rural part of the country is often forgotten. Tanzania has amazing wind power potential, there is no doubt this is an opportunity for impact,” Tomás Rothfuchs Albrecht, one of the students involved in the project, told The Local.

“The whole idea behind the turbine is to empower people to live off the grid. Some handbooks have already been published teaching people how to build their own turbines from scratch. That's crucial to our project because in Tanzania, due to geography, it’s nearly impossible to make a comprehensive grid,” he added.

After meeting their first funding goal, a school in the Singida region will be supplied with electricity this summer and a workshop held in order to teach locals how to use it. The project hopes to secure further funding to continue building more turbines and also teach more Tanzanians how to build their own locally and become self-sufficient. The wind turbines are made out of cheap, locally available recycled materials, and are relatively easy to install, maintain and build. One turbine cannot power a whole village, but it can make a major difference, Rothfuchs Albrecht explained.

“It's quite small and can power rooms, or cellphones, not a whole village. That seems like a small thing but in the context of no electricity it means a lot. Similar projects have powered dorms that meant girls could study and stay there during the night if needed to due to safety concerns, instead of walking back home.”

“Using wind power to charge cellphones is also crucial. It may sound like a luxury at first, but in poor and developing countries cell phones are sometimes the only way to access information, contact people and even exchange money: mPesa for example is a kind of Swish (money transfer app) really common in Tanzania and Kenya.”

In August, the international group of students which includes Swedes, Lithuanians, Brazilians, Germans and Americans will start looking to expand their team in order to power a new location or new locations in Tanzania next year.