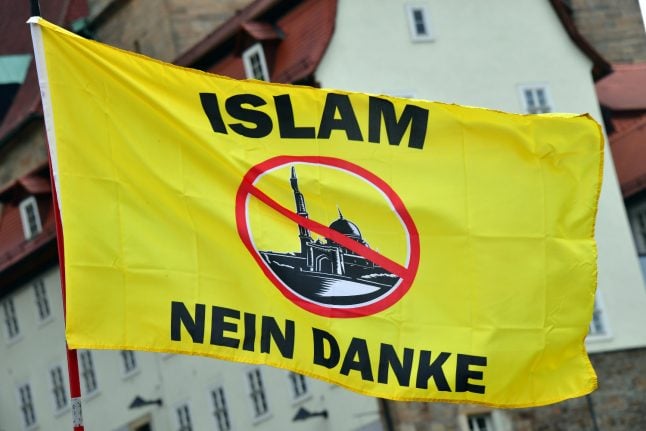 A sign during an AfD protest of the planned mosque in Erfurt, reading "Islam, no thank you." Photo: DPA.

Half of a pig’s head as well as pig feet and entrails were among the body parts found on the nine 1.5-metre wooden stakes at the site of the planned mosque, according to police on Monday.

The pig may have been used because many Muslims do not eat pork.

A criminal police unit is now investigating who was responsible for the act.

“It should simply not be the case that minorities are attacked in this way in a civilized society,” said Mohammad Suleman Malik, a spokesman from the Ahmadiyya Islamic community that is building the mosque, to news site Thüringen24.

Malik added that the community would not react with anger, but rather with patience, citing the Muslim prophet Muhammad as an example. He also said they were open to having a dialogue with their critics.

There have already been protests against building the mosque, including by the far-right AfD party, whose state leader Björn Höcke has called the plans “part of a long-term landgrab project”.

In March, opponents of the mosque placed giant wooden crosses at a site neighbouring the construction area as a form of protest.

Last year, another Ahmadiyya community in Leipzig was also targeted for its plans to build a mosque, with someone leaving a dead piglet and the words “Mommy Merkel” in red paint at the site of the planned building.

Malik said that it was not so much the use of the dead pigs that bothered him.

“It is an attack on the behaviour of a civil society and on peaceful coexistence.”

Hate crimes in Germany are classified as politically motivated crimes, which overall reached a record high last year, according to the interior ministry. The explosion in hate crimes has coincided with hostile reactions to Germany taking in record numbers of refugees over the past two years, many of whom are Muslim.