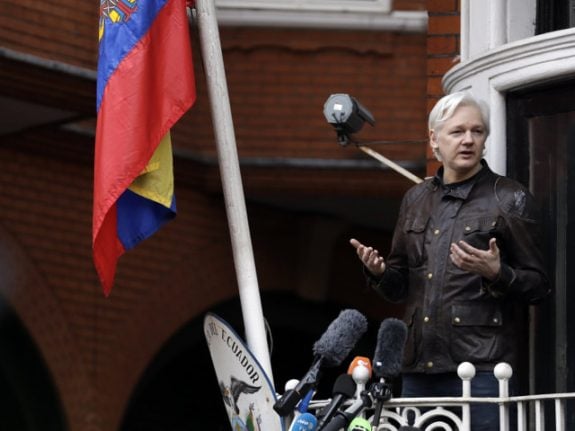 The election victory of Moreno, who took office Wednesday, came as a relief for Assange after the socialist president's conservative rival had vowed to kick him out of Ecuador's London embassy.

On the night of the election in April, Assange took to Twitter to celebrate Lasso's loss.

But Moreno — speaking at a ceremony at Cochasqui archeological site in the northern Andes on Thursday — “respectfully” asked the Australian “not to interfere in Ecuadorian politics, nor in the politics of its allies.

“His status does not allow him to talk about the politics of any country, let alone ours,” he said.

It was Moreno's second warning for Assange in as many months, after he urged him following his election victory to “not meddle” in Ecuador's affairs.

The admonishment comes a week after Swedish prosecutors dropped a seven-year rape allegation against Assange and withdrew the European arrest warrant that had prompted his flight to the embassy and an appeal for asylum.

Former Ecuadorian president Rafael Correa said earlier this week that his country had “done its duty” by granting him asylum in 2012.

Moreno added on Thursday that his country “will ensure” that Britain “allows the transfer of Mr Assange to Ecuador or to the country in which he wishes to reside”.

However, British police have said they still intend to arrest Assange if he leaves the London embassy after he violated the terms of his probation in Britain in 2012 when he took refuge in the diplomatic mission.

The WikiLeaks founder has always proclaimed his innocence of the charges, saying his extradition to Sweden would have led to his transfer to the United States, where he could be tried for publishing a huge store of confidential military and diplomatic documents.