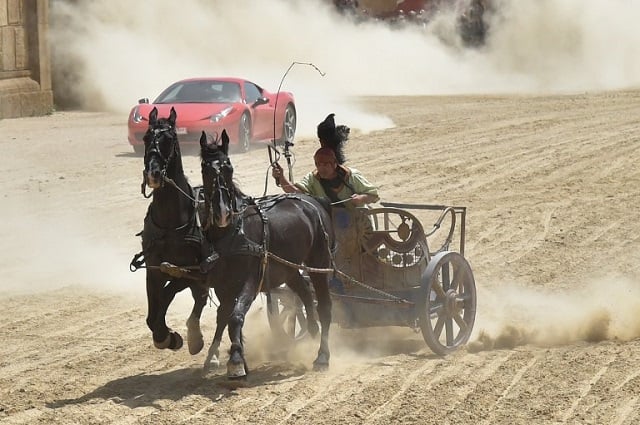 Fabio Barone finally drove his “prancing horse” Ferrari to victory by a handful of seconds to see off the thoroughbreds at the course just south of Rome.

The venue was the setting for much of last year's remake of the original 1959 Ben Hur epic – which won 11 Academy Awards. The original's chariot race remains one of the iconic sequences in cinematic history.

Organizers of Thursday's race provided a few handicaps for Barone, including having to take a longer outside 'lane' trajectory while enduring a liberal application of extra sand on the course.

Barone also had to put in an extra half lap and forego electronically assisted steering technology.”

A Ferrari launched in a straight line on sand is a bit like launching a car on a greasy piste,” said Barone, 44. “When you get to the bend it's very difficult to turn.

“The main problem was keeping my car straight. From the first lap I no longer had any brakes,” he added as the sand clogged up the brakes' circuit. The chariot racer dressed in the costume of a Roman also found the bends tough going from the outset.

“When the horses saw it they thought they were going to be able to head off home and didn't want to make turns any more,” he said.

For Barone, the unusual challenge added to his high-powered CV including two speed stunts which earned him a place in the Guinness Book of Records for negotiating dangerous mountain passes in China's Hunan province and the Carpathian mountains in Romania.

“Racing against those two horses was truly moving,” he said, lauding the “really exceptional animals.”

READ ALSO: Keep up with the latest goings-on in the Italian capital at our Rome section