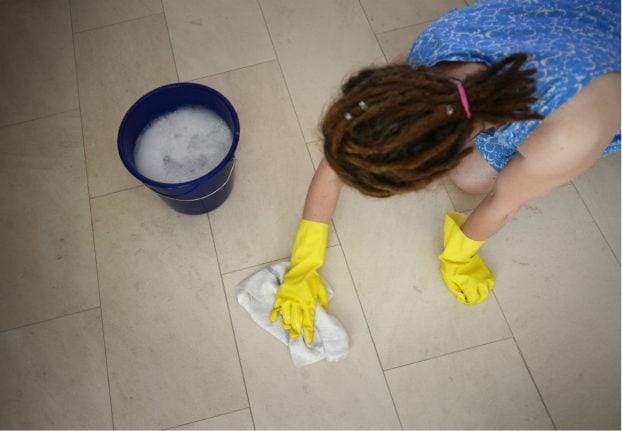 The slightly-built 60-year-old with a touch of green make-up  around the eyes, has spent half her life working in the clinic in her hometown of Bochum, in Germany's most populous state North Rhine-Westphalia (NRW).

Years of hard physical labour have taken their toll on Petra's back and knees, but she still frequently leaves the comfortable confines of her union representative's office to pitch in alongside colleagues – most of them also women.

“I feel like I've been cheated,” Petra says bluntly as she thinks of her tough working conditions and gloomy prospects for retirement.

Her employer, a services firm, pays her €10.51 gross per hour – leaving her with a take-home pay packet of €1,115 per month after working 39 hours each week.

After rent and bills, that leaves some €350 per month to cover food, clothing, diabetes medications, and an occasional ice cream treat.

In five years' time, she will be able to retire after 41 years of work, leaving her with a pension of €665 per month.

“I'd rather not think about it… I'll fall into the category of poor pensioners,” she worries. “I just hope that I'll still be in good enough shape physically to keep working a €450-per-month job after retirement.”

“Living in one of the wealthiest countries in the world and being treated like this, I can't believe it.”

Millions of Germans are in a similar position to Petra, struggling to make ends meet each month and fearing the day when they finally retire.

“Mini-jobs”, like the one she hopes will keep money coming in, were one of the headline measures of the “Agenda 2010” labour market reforms under Social Democrat Chancellor Gerhard Schroeder in the early 2000s.

The positions went hand-in-hand with the introduction of so-called “Hartz IV” unemployment benefits – a low minimum payment afforded to jobseekers after their first year out of work.

With a weaker social safety net, “fear of unemployment grew in German society, and many people were pushed towards insecure work,” explains Eric Seils of the Hans Böckler Foundation, part of the German Trade Union Confederation.

Low-paid jobs are the “flip side of the jobs miracle” that Europe's largest economy has enjoyed since the reforms, which passed with cross-party support from Merkel, then leader of the conservative opposition.

SEE ALSO: Everything you need to know before the vote in North Rhine-Westphalia

While unemployment is at its lowest since German reunification in 1990, some 9.7 percent of people in work live below the poverty line – defined as income of around €940 per month or less.

The figure has grown from 7.5 percent in 2006 and surpasses the EU average of 9.5 percent, according to Eurostat data.

With the economy powering ahead and government coffers bursting with surplus tax revenue, Social Democratic Party (SPD) leader Martin Schulz has placed “more social justice” at the core of his challenge to Merkel and her Christian Democratic Union (CDU) ahead of September's national elections.

The SPD have vowed to roll back parts of Agenda 2010, planning to extend higher unemployment benefits and limit the use of short-term work contracts.

Meanwhile, the CDU now find themselves defending the crowning achievement of their historic opponents' last chancellor.

Factory closures by Nokia and carmaker Opel have shaken Bochum, a former mining town of some 360,000 inhabitants in the once-mighty Ruhr industrial region.

Voters will head to the polls Sunday for a regional election in NRW, seen by many as a test run for the national vote.

“We have to completely rethink the system,” believes Anton Hillebrand, who runs a local club that advises members on navigating complicated benefits applications.

Longtime taxi driver Rainer Piske, 54, is one of those turning to the state to help him and his family.

Rainer has yet to choose his candidate in the elections, but cleaner Petra Vogel is a member of far-left Party Die Linke – disdained by conservative politicians as posing a danger to the German economy should it ever gain power.

But she is certain that “until we have a completely different government, nothing is going to change”.