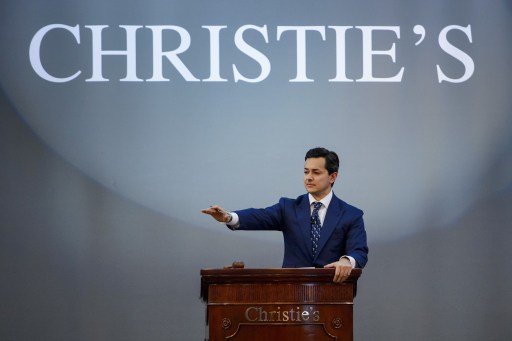 File photo: Fabrice Coffrini/AFP
The 92-carat pendant suspended from a pearl sautoir is the showcase piece at Christie's spring sale, set for May 17th at the ultra-luxe Four Seasons des Bergues hotel on the shores of Lake Geneva.
Despite what Christie's calls the piece's “pure quality and magnitude”, the necklace is unlikely to approach the jaw-dropping sums paid for smaller coloured diamonds in recent years.
In Hong Kong last month the 59.60-carat “Pink Star” fetched a record $71.2 million (65.1 million euros), a price that highlighted the galloping market for rare pink and blue diamonds.
Film buffs with a seat at the Christie's sale will also have the chance to bid on a set of ruby and diamond earrings and matching bracelet given to late Hollywood star Elizabeth Taylor in 1957 by her then husband, director and producer Mike Todd.
Christie's said the parure could sell for up to $500,000.
A total of 250 lots will be on offer at the auction, likely to be attended by high-end buyers from across the globe but especially Asia, a continent that has increasingly scooped up the world's most valuable stones.