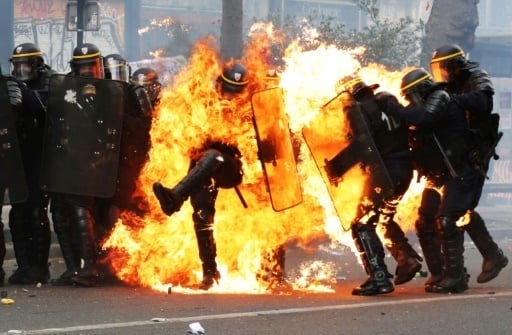 A demonstrator takes part in a march among fumes of smoke bombs during clashes taking place at a march for the annual May Day workers' rally in Paris on Monday. Photo: CHRISTOPHE ARCHAMBAULT / AFP
Four police officers were hurt in clashes in Paris between masked youths throwing molotov cocktails and riot police who responded with teargas.
One officer was engulfed in flames, an AFP photographer saw, and unconfirmed reports said he had suffered serious burns.
The Local's Oliver Gee also witnessed a scooter set on fire as well as demonstrators tearing down walls and throwing pieces at police.

Scooter torched at May Day rally in Paris. pic.twitter.com/2GNjWk95Uj

Rioters in Paris breaking down walls to throw at police officers. pic.twitter.com/hn30oeNo9Y

Reacting to the scenes on Twitter, far-right presidential candidate Marine Le Pen said: “This is the sort of mess … that I no longer want to see on our streets.”

The traditional May Day marches staged by France's powerful labour unions provided a useful gauge of the country's mood as it prepares to choose between Le Pen and centrist frontrunner Emmanuel Macron.
READ ALSO: French unions blast Le Pen: 'She does not represent workers'
The protests underlined the conspicuous absence of the united front shown in 2002 when Le Pen's father Jean-Marie shocked the country by reaching the run-off.
On this day 15 years ago, some 1.3 million people, including 400,000 in Paris, took to the streets of France in union-led demonstrations to protest against the founder of the National Front (FN). That show of force, coupled with a political closing of ranks, helped centre-right Jacques Chirac inflict a crushing defeat on Le Pen senior.
This time, with the left-wing candidates eliminated in the first round, the left is deeply divided over the choice between Le Pen's 48-year-old daughter and Macron, a 39-year-old former investment banker.
In Paris's Place de la Republique, 28-year-old teacher Camille Delaye was holding a placard that read: “Abstention is a political act” — meaning he is so disgusted by both candidates, he will not vote on Sunday.

May Day march passing through Bastille. A lot of anti-Le Pen chants, but not everyone happy with Macron either… pic.twitter.com/OeI6CoFo25

But Nastassja Naguszewski, 28, who works in local government, said: “You have to put Le Pen as low as possible. One of them is a candidate who will uphold republican values and one is not.”
Two unions, the CFDT and Unsa, have called for their members to back Macron on Sunday.
But while three other more left-wing unions including the biggest, the CGT, have called for a demonstration against Le Pen's vision of French identity, they have stopped short of backing Macron whose economically liberal outlook worries many on the left.
Seeking to capitalise on those concerns, Le Pen told thousands of her supporters at a rally Monday to reject “the world of finance, of arrogance, of money as king” that she said Macron embodied.
Her rival told France 2 TV on Sunday that “deep down, she doesn't care about the people”.

'Not the same thing'

Some militants have formed a movement they have called “Social Front” to block both candidates and marched under a banner saying: “Rock and a hard place: Social Front, it will be won in the streets.”
CGT leader Philippe Martinez said he “deeply disagreed” with that approach, arguing that Le Pen and Macron “are not the same thing”.
“The National Front is a racist, xenophobic party that is anti-women and anti-workers because it is also an economically liberal party,” he said.
Le Pen hit back that the unions “are not defending workers' interests, they are looking after their own interests”.
Macron is currently favourite to become France's youngest ever president, leading Le Pen by 19 points in the polls, but she has shown she is a cunning campaigner.
Macron spoke later Monday at a convention centre near the La Villette science park in northeastern Paris as he seeks to highlight his appeal as a future-oriented innovator. He said only his En Marche movement could “remake” French politics.
Le Pen took her campaign Monday to the working-class Paris suburb of Villepinte where the first key speaker was Nicolas Dupont-Aignan, a eurosceptic from outside the FN who Le Pen has said will be her prime minister if wins on Sunday.
She is hoping to capture some of the 1.7 million votes he won in the first round, although his support for Le Pen has divided his own party.
In Paris, Le Pen's 88-year-old father Jean-Marie — whom she kicked out of the FN in 2015 — paid tribute at a gilded statue of Joan of Arc, whom the party has adopted as a nationalist icon.
His presence in the campaign is an irritation for his daughter, after he repeatedly called the Nazi gas chambers a “detail” of history.
Marine Le Pen, who has worked to rebrand the FN to shed its associations with her anti-Semitic father, on Sunday laid a wreath at a World War 2 monument in the port of Marseille as France marked a day of remembrance for the victims of the mass deportation of Jews to Nazi Germany during World War 2.
Macron paid his respects at Paris's Holocaust memorial.
The election runoff takes place next Sunday.
By AFP's Clare Byrne and Guy Jackson with reporting by The Local's Oliver Gee.