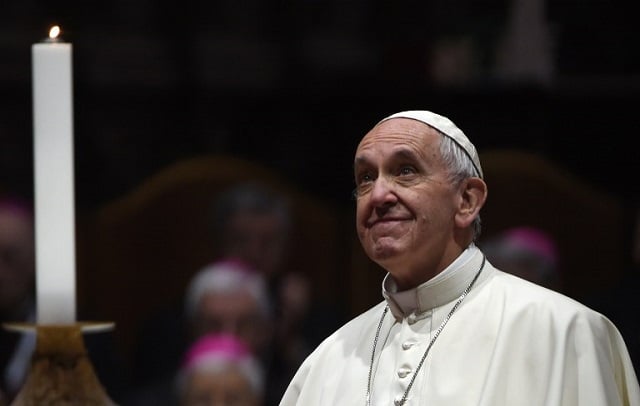 The 80-year-old pontiff is due in Cairo around 1400 (1200 GMT) and his 27 hours on Egyptian soil will include a meeting with the grand imam of the Al-Azhar mosque, sealing a recent improvement in relations between Catholicism and the Sunni branch of Islam.

Security will be extremely tight with Egypt under a state of emergency following two bombings in Coptic churches earlier this month that killed 45 people.

All of the country's churches have been placed under additional protection because of the risk of another assault timed to coincide with Francis being in the country.

The most recent attacks have been claimed by the Isis group whose propagandists regularly boast of their intention of mounting attacks on the Vatican, as well as Egypt's Coptic Christians.

Despite the dangers, Francis is expected to conduct most of his business in a normal vehicle and electric pope mobile-style golf carts.

“Please pray for my journey tomorrow as a pilgrim of peace to Egypt,” Francis said on his Twitter account on the eve of his departure.

Francis will meet privately with the grand imam, Sheikh Ahmed al-Tayeb, an Islamic philosophy professor who visited the Vatican last year and is considered the highest religious authority in Sunni Islam.

He is then due to give a speech as a “simple participant” in an international conference for peace organised by Al-Azhar, a seat of learning for 1,000 years as well as a celebrated mosque.

Vatican dialogue with the Muslim world, a priority for this pope, was set back significantly when Francis's predecessor Benedict XVI made a speech in 2006 in which he was seen as linking Islam to violence.

The now-retired German pontiff's 2011 comments condemning an attack on a Coptic church compounded the chill, with Al-Azhar denouncing Benedict for meddling in Egypt's affairs.

The head of world's 1.3 billion Catholics will also meet Friday with the Coptic Pope Tawadros II.

The two men are due to walk together to the Coptic church of Saint Peter and Saint Paul in the heart of Cairo, which was hit by a bomb attack in December claimed by Isis that killed 29 people.

The attack was the deadliest targeting the Coptic community since the 2011 suicide bombing that killed 23 people in Alexandria.

The pope will be joined at the conference by Ecumenical Patriarch Bartholomew, Archbishop of Constantinople, the spiritual leader of the Orthodox world and a close ally.

The Argentine will also meet with the country's strongman President Abdel Fattah al-Sisi, who has been criticised internationally for human rights abuses but is seen as something of a friend of Egypt's Christian minority.

In 2015, he became the first head of state to attend a Christmas mass. On Saturday, the pontiff will preside over a mass for the country's small Catholic community, estimated to number around 272,000 spread across various rites.

Egypt's Copts, who make up about ten percent of the country's population of 92 million, are the Middle East's largest Christian minority and one of the oldest.

But they feel increasingly under pressure as a result of Islamist influence in many walks of Egyptian life with many of them saying they are treated like second-class citizens.