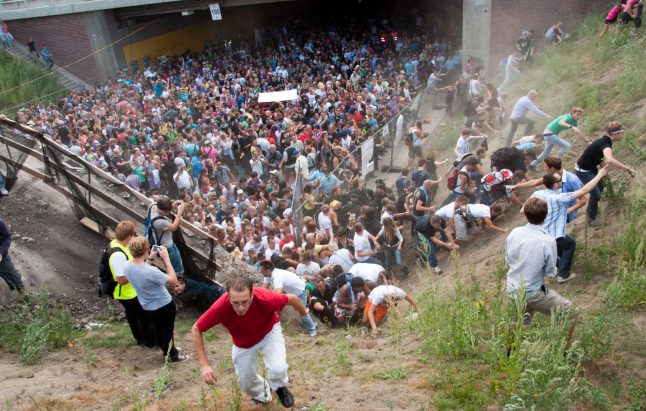 Thousands fleeing the chaos of the 2010 Love Parade, where 21 people were crushed, trampled or suffocated to death. Photo: DPA.

Overturning a year-old ruling, the court decided that four event organizers and six officials of the city of Duisburg will face charges including negligent manslaughter and causing bodily harm.

Prosecutors, victims' relatives and survivors have pointed to chaotic crowd management as the cause of the disaster in which revellers were crushed, trampled to death and suffocated.

A Duisburg court a year ago dismissed the criminal case, casting doubt on an expert report on the disaster, in a ruling that angered victims' groups.

But now, after an appeal, a higher panel in Düsseldorf overturned that ruling, saying there was a “sufficiently” high chance of convicting those responsible.

It said in a statement there was “cause to believe” that shortcomings in organizers' duty of care caused the deaths and injuries.

The court did not set a starting date for the trial.

Negligent manslaughter carries up to five years in prison.

Prosecutors blamed serious planning errors for the July 24th 2010 tragedy at the site, a former cargo rail depot in the western industrial city.

The city mayor at the time, Adolf Sauerland, became the prime target of public anger, accused of having ignored warnings that the summer festival was a disaster waiting to happen, and was forced to resign by a 2012 city referendum.

Following wrangling over permits and arguments over the mountains of trash left behind, the festival moved from Berlin to cities in western Germany's industrial Ruhr region until the tragedy of 2010.

The deadly disaster led organizers to declare that the Love Parade would never be held again “out of respect for the victims”.