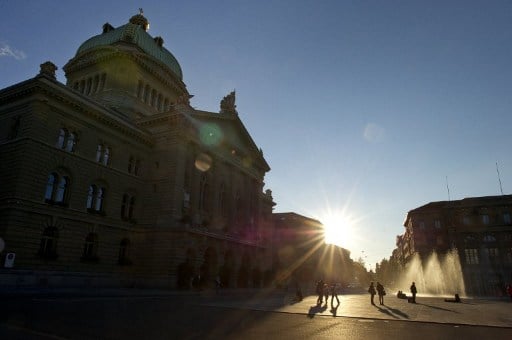 The Swiss parliament in Bern. Photo: Fabrice Coffrini/AFP
This year’s Easter Monday march, organized by pacifist groups, had the slogan “My money leads to war” and aimed to protest against the practice of Swiss banks and pension funds investing in companies that manufacture arms for conflict, reported Swiss news agencies.
The march was supported by some 40 organizations including the Group for a Switzerland without an Army (GSsA), churches and charity groups.
It aimed to raise awareness of the issue, since many customers of banks and insurance companies in Switzerland are not aware of such investment practices, march participants told news agencies.
The protest also aimed to support the GSsA which last week launched a popular initiative to ban the financing of war under Swiss law.
The group has until October 2018 to gather the required signatures to push the initiative to a referendum.
To mark the launch, 86-year-old peace activist Louise Schneider spray-painted ‘Money for weapons kills' on a billboard surrounding the Swiss National Bank, currently undergoing renovations.
She was promptly arrested by police.