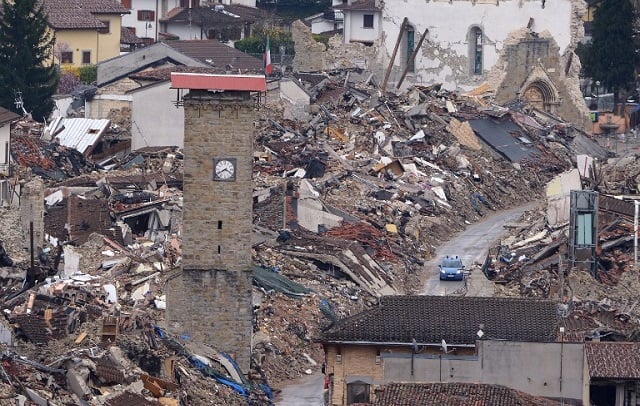 “This morning I surprised and chased away some people who were photographing themselves by the ruins,” Pirozzi added.

However, he urged would-be visitors that they were welcome to come to the town, to “see our mountains and surroundings, which are extraordinary” – as long as they were respectful towards the scenes of tragedy.

Amatrice bore the brunt of the August 24th earthquake, with the majority of its 291 victims being buried under the town's collapsed masonry. Directly after the quake, Pirozzi said: “Three quarters of the town just isn't there any more.”

Since the original disaster, aftershocks and new tremors have destroyed the town's weakened buildings, with its iconic church and bell tower falling in January this year.

The president of Lazio, the region where Amatrice is located, shared his support for the mayor on Twitter.

“All possible solidarity to Sergio Pirozzi: don't turn the tragedies and work of these past months into 'curiosities' or souvenirs,” wrote Nicola Zingaretti.

Pirozzi has previously spoken out, together with other mayors from the affected towns, about his frustration over government delays to the reconstruction efforts.

“The impression is that someone is abandoning us,” he told Italy's Chamber of Deputies last November, almost three months after the quake.

A few weeks ago, Britain's Prince Charles visited the town during a six-day tour of Italy intended to boost European ties ahead of Brexit negotiations. Pirozzi thanked the prince for his “sympathy and closeness”, and for “setting aside protocol by staying in Amatrice an hour longer than expected, due to his deep interest for our land, which perhaps he now considers as partly his own”.

Recovery efforts in Amatrice will likely take several years, and the damage wreaked by the earthquakes has already cost Italy an estimated 23 billion euros, according to the Civil Protection Agency.

The first temporary homes for the thousands made homeless by the disaster arrived in Amatrice in mid-March. The twenty-five wooden homes, known as 'casette' or 'little houses', were built as close as possible to the destroyed historic centre, and a further 475 houses are expected.

READ ALSO: After the earthquakes, why you should still visit Central Italy