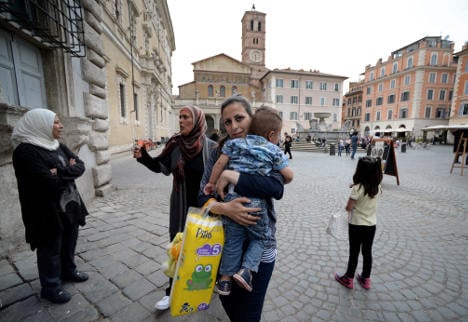 Now instead of violence their worries echo those of the local population: how to get a stable job in a country plagued by unemployment.

The lives of the 12 refugees were transformed at a startling speed: blocked for weeks on Greece's Lesbos island last year, one evening they were offered a chance to relocate to Italy and the next day, April 16th, the pope visited and took them back home with him.

“We did not have time to think about it,” remembers 32-year old Nour.

She had fled war-torn Syria with her husband Hassan, and had been planning on trying to get to France, as Nour has a masters in plant microbiology from Montpellier. The couple had never thought about seeking sanctuary in Italy, but jumped at the chance.

The pope's trip to Greece was aimed at highlighting the plight of hundreds of thousands of refugees arriving on the shores of Europe.

The Argentine, who has repeatedly condemned Western society for its indifference to refugees, has made the cause of migrants one of the defining themes of his papacy.

The Vatican paid for the three Muslim families to be looked after by the Sant'Egidio Catholic community which is co-organiser of a “humanitarian corridor” which has already brought some 700 Syrians to safety here.

In the blink of an eye they were provided with accommodation, given intensive Italian lessons and the children were enrolled in school.

They were granted refugee status within a few months of being in Italy and settled into “a life of peace”, Nour says, looking dotingly at her three-year old son Riad as he digs into a huge strawberry ice-cream.

In March she found a job as a biologist at the Bambino Gesu hospital in the Italian capital. The mothers in the other two families joined a housekeeping agency.

But Hassan, an expert gardener, has had to settle for working a few days a week in a repair shop.

“I'm worried, like everyone else: how to move forward in life, find (Hassan) a job,” she said in Italian.

But in a country where the unemployment rate still tops 11 percent, rising to 35 percent among the young, she acknowledges: “It's not just my fear, all Italians share it.”

On the upside, fears for relatives left behind in Syria have eased after Hassan's parents and three younger brothers arrived two months ago in Naples through the humanitarian corridor.

Nour's family is expected to be transported to safety in nearby France in the next few weeks.

In August, 80-year old Francis invited his Syrian guests to lunch at the Vatican.

“The pope changed our life in one day. It's a real example for all religious people, he uses religion to serve men,” says Nour, who was touched that Francis remembered her name when she crossed his path again in February.

Daniela Pompei from Sant'Egidio, who has accompanied the Syrians since their arrival, says the integration has been a great success.

“Our goal now is for these families to become totally autonomous, for them to make their own lives,” she said.

It has not been easy for Abdelmajid, 16, and Rachid, 19, who took Francis's plane with their parents and little sister.

While the younger boy attends high school, the elder is too old and still struggles to speak basic Italian.

Their principle woe is one shared by many Italians their age: they want to visit a dermatologist to sort out their acne.

Little Riad, oblivious to such teenage trouble, runs cheerfully from one to the other, his ice-cream dripping on his hand.

“I'm glad my son has started to live like other children his age,” Nour says.