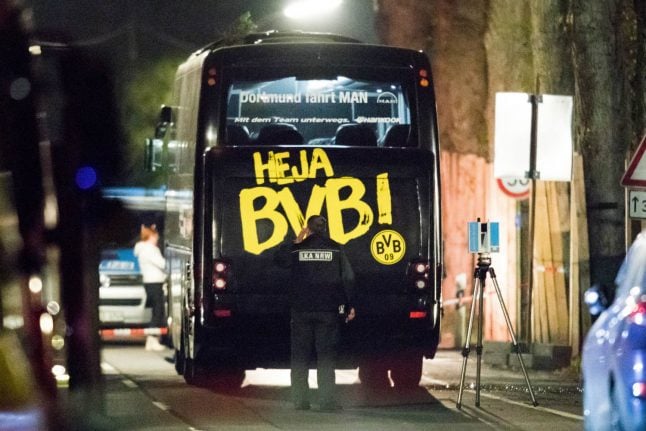 The Dortmund team bus after the explosion. Photo: DPA

Three explosions took place at around 7.15pm on Tuesday, immediately after the bus left the team's hotel, around 10 kilometres from the Signal Iduna Park stadium, police have confirmed.

The explosives were most likely hidden in a bush at the edge of the street. The bus was severely damaged in two spots, with police describing the bombs “as serious in their build.” A further explosive device was found at the site, which was not detonated.

Police believe it was a “targeted attack on the Dortmund team.”

A letter has been found near the blast site taking responsibility for the attack. The letter “claims responsibility for what happened,” prosecutor Sandra Lücke had said late on Tuesday, telling journalists that “its authenticity is being verified.”

Dortmund's Spanish defender player Marc Bartra underwent surgery after he suffered a broken bone in his wrist during the blast. A policeman, who was on a motorcycle and had been escorting the team bus, suffered trauma from the noise of the blasts.

The case has now been taken over by federal prosecutors, who are investigating it as a case of attempted murder.

The Champions League quarter-final tie between Dortmund and AS Monaco will be played on Wednesday evening at 6.45pm instead.

Fans were told their tickets for Tuesday would still be valid on Wednesday, leaving visiting Monaco fans in need of accommodation over night.

Both teams tweeted that AS Monaco supporters could use the hashtag #bedforawayfans on Twitter to find locals willing to take them in. And the hashtag was quickly picked up and spread, with football enthusiasts sharing photos of themselves sharing meals and sofas with the opposing team's fans.

What we don’t know

It became clear on Wednesday afternoon that the focus of police attention was now on an Islamist motive for the attack, but little else is so far known about the culprits.

Federal prosecutors announced on Wednesday that they had detained one man from the Islamist scene and had searched the apartment of another suspect. But on Thursday prosecutors said that there was no evidence to link the detained suspect to the attack, and instead applied for an arrest warrant for him over suspicions that he is an Isis member.

In a very short statement on Wednesday, the prosecutors said that the attack had a possible terrorist background and had probable Islamist links.

But police have still not officially ruled out a second line of enquiry – that the attack was carried out by the far-left Antifa scene.

DPA reported early on Wednesday that a second letter emerged online on Tuesday evening, claiming the attack for Antifa.

The attack was against the team because of what Borussia Dortmund symbolizes, namely racism, Nazis, and right-wing populism, the author of the letter claimed.

But the editor of the website on which the letter appeared has said it was a fake, presumably put up by members of the German far-right scene.

Prosecutors also said on Wednesday that they had “considerable doubts” about the letter.

The focus of investigators' attention now seems to be a letter found at the scene of the attack which used Islamist wording.

The letter purportedly starts with the words “In the name of Allah the merciful, the compassionate.”

It then goes on to blame Germany for the murder of Muslims in areas of Syria controlled by Isis, saying attacks on German sports stars are legitimate until German Tornado fighter jets are withdrawn from the fight against Isis.

But police are being cautious about the veracity of the letter, saying that it could be an intentional red herring meant to mislead investigators.