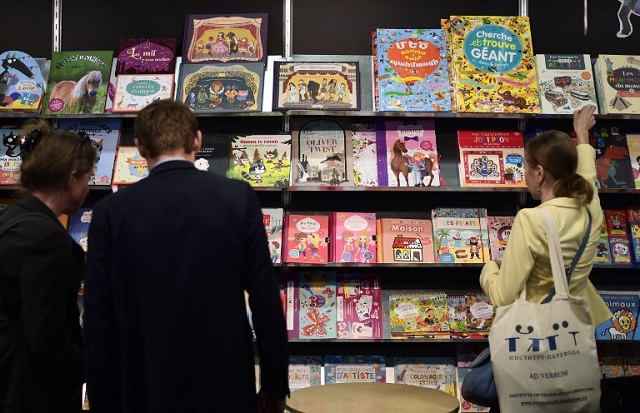 Distressing images of African migrants being plucked from heaving seas or the coffin-strewn aftermath of major sinkings have become a regular feature of television news bulletins since the crisis began spiralling out of control four years ago.

It is an unavoidable part of a new generation's digital landscape and parents across Europe are having to find ways to enable their offspring to make sense of it.

That's what writers and illustrators are for and the treatment of the issue was a prominent theme at this week's Bologna Children's Book Fair, the biggest of its kind in Europe.

Author Antonio Ferrara was promoting his new book, “Casa Lampedusa”, a tale set on the Italian island on the frontline of the crisis. Antonio Ferrara with another of his books. Photo: Miguel Medina/AFP

“There is a word of eastern origin, 'abracadabra', that we think was invented for children playing at magic. In reality, it means, “by speaking, I create,” Ferrara told AFPTV.

“For me as an author, that means that something that does not exist, like trust in others or the desire to welcome foreigners, can be created, if a story is well-told.”

Ferrara's book is told through the eyes of a 13-year-old boy who sees the islanders' lives transformed by the waves of humanity being washed up, sometimes literally, on their shores.

“The book begins with something that Bono, the U2 singer, said he had heard a migrant say: 'I'm not dangerous, I am in danger'.

“The challenge is to touch children's hearts before speaking to their minds and to get there you have to get away from what they see on the news and engage them in a fictional story that is founded in fact.” The book, which won an award in Bologna, seeks to place in a historical context the contemporary arrival of hundreds of thousands of migrants in Europe from Africa, the Middle East and South Asia.

“We show that it (mass migration) is not a new thing, and that people leaving their homes are doing so for political reasons, because of climate change or wars,” said publisher Thierry Magnier.

“It is not an easy subject and our approach is to treat young readers as an intelligent audience that can be told things without them being embellished or diluted.”

Also being promoted in Bologna was the Italian translation of “The Optician of Lampedusa”, a story by BBC journalist Emma-Jane Kirby that emerged from her award-winning reporting from Lampedusa.

READ ALSO: The Local speaks to the doctor who has met every migrant off the boat at Lampedusa

The book tells the traumatic experience of Carmine Menna, an optician on the island who saved some of the survivors and witnessed many more perish in one of the deadliest sinkings, in October 2013, while out on a boat trip with his wife and friends.

Alerted by screams they first thought were seagulls, the couple and their crew hauled 47 people to safety. But 368 others perished, including a new mother with her baby still attached to her by its umbilical cord.

The book tells the story of the disaster through the eyes of the optician, describing how he is compelled to make life-or-death decisions about which desperately outstretched arm to clutch, then watch as others are engulfed by the waves.

It is a challenging read, but reviewers have acclaimed its value to readers of all ages.

It “goes beyond the voyeurism of 24-hour news to identify something timeless and troubling,” Britain's Guardian newspaper said in its review. “Kirby challenges us to do more than cry.”

By Franck Iovene and Angus MacKinnon