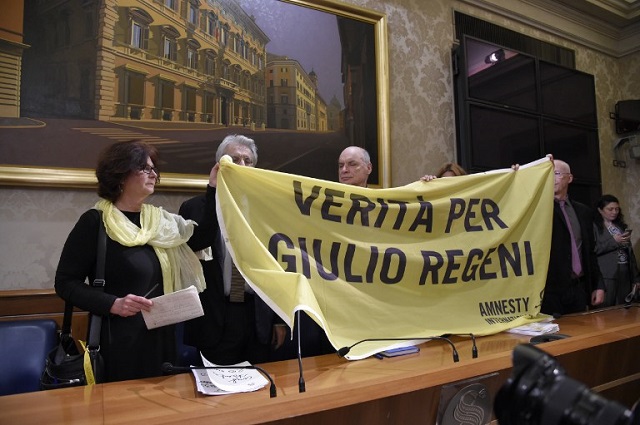 “We are sure that the pope will not be able to not remember Giulio during this trip and will share our concrete demand for the truth so that we can finally find peace,” Regeni's mother, Paola Regeni, said in a press conference at the Italian Senate.

Francis is due to travel to the Egyptian capital on April 28th for a two-day visit that will include meetings with President Abdel Fattah al-Sisi and the grand imam of the Al-Azhar mosque and university complex.

Raising Regeni's case publicly would be a highly unusual move for a pope, but Francis has repeatedly demonstrated that he is nothing if not unpredictable.

Regeni, a 28-year-old Cambridge PhD candidate, disappeared from central Cairo on January 25th, 2016, a day when security in the capital was tight as it was the fifth anniversary of the uprising that ousted longtime leader Hosni Mubarak.

His mutilated body was found on the outskirts of the city on February 3rd.

He had multiple broken bones and an autopsy concluded he had been beaten with fists, batons and hammers. His mother later said she was only able to recognize her son by the tip of his nose.

The case has badly strained the traditionally close relationship between Italy and Egypt, with the authorities in Rome frustrated at the lack of progress towards establishing who was responsible for Regeni's death, and sending in their own experts to work on the probe.

Egyptian police initially suggested the student had died in a traffic accident, but later said he had been killed by an anti-foreigner criminal gang whose members were all killed in a shootout with police.

That account was met with suspicion in Italy, where politicians and the media have suggested Regeni was slain by elements of Egypt's security services. There is no consensus however on the motive for the killing.

Alessandra Ballerini, the Regeni family's lawyer, said during Monday's press conference that Giulio Regeni had been the victim of “state murder,” and that she had evidence two senior security officials were involved in his disappearance.

Regeni was in Cairo researching Egyptian street vendor trade unions, a sensitive topic, and had written articles critical of the government under a pen name.

Egyptian authorities confirmed in January that police looked into his activity in the weeks prior to his death, but concluded he posed no threat to state security.

Other theories for Regeni's death include the possibility that he was a spy, or was mistaken for one, and that he was killed by rogue elements in connection with some kind of internal battle within the security services.

The case has refocused international attention on rights abuses in Egypt.

The country's own watchdog said in a report last year that it raised 266 cases of enforced disappearances with the interior minister.

The report also highlighted the continuing torture of prisoners, which it said fed suspicions that Regeni had been abducted by security agents.