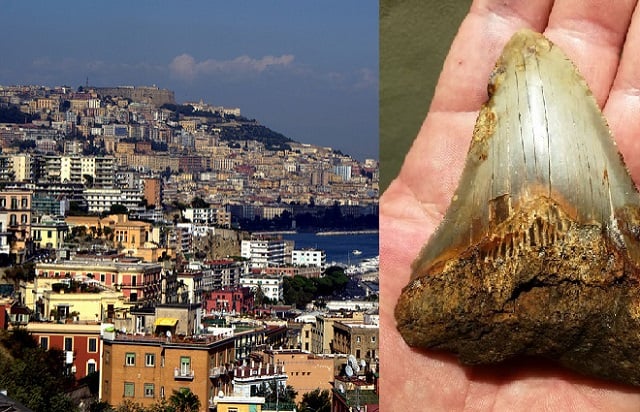 Paleontogist Gianluca Minin made the discovery at Naples' Galleria Borbonica, a vast underground site originally built as an escape route for king Ferdinand II and later used as a shelter during the Second World War.

Minin leads a team of volunteers in excavation work at the tunnels every Sunday, usually unearthing artefacts from the war era. This week however, he made a more unusual find: a tooth he believes comes from a megalodon.

The megalodon is an extinct species of shark, which lived over two million years ago and whose name literally means 'big teeth'. Remains of the species are extremely rare.

“It's a classic stroke of luck, because it's an impossible discovery,” Minin told The Local. “We were getting rid of a build-up from a well and working in a soil layer dating back to the war era, when I noticed a glossy surface.” “When I realized what I'd found, I was speechless for about two minutes – the others were concerned!”

Minin recognized the tooth having found a similar but smaller example at the age of 17 when working on a dig in Taormina.

As for how it got there, he believes it was part of a private collection but discarded around 70 years ago. “Perhaps it belonged to some 19th-century collector whose heirs didn't understand what it was and threw it into the 30-metre pit,” he said.

Fossils suggest that the beasts could grow to around 18 metres long and looked similar to the great white shark, making them the largest shark to have ever lived on Earth and one of history's most menacing predators.

Experts will carry out analyses of the tooth, and if Minin's hypothesis is proved correct, it could be a useful find for paleontogists in piecing together the behaviour of the mega shark.