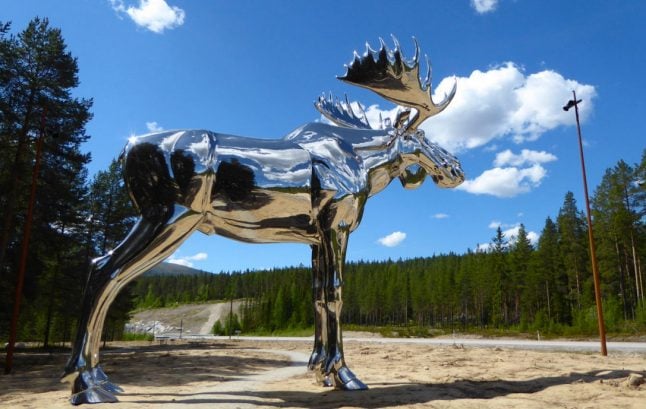 Made of stainless, polished steel, this striking moose sculpture (the world’s largest) is a whopping 10m (33ft) tall and 12m (39ft) long. Designed by Norwegian artist Linda Bakke, it was erected in Stor-Elvdal municipality along one of the busiest roads in Hedmark (the RV3 between Oslo and Trondheim) in order to reduce the number of accidents in the area. So take a break from the driving and stretch your legs as you admire the king of the forest in all its glittery splendour. You can even have a picnic at the nearby designated area (which comes complete with matching giant moose droppings) before resuming your journey.

Swords in Rock (Sverd i fjell), Stavanger
A popular stop with visitors to Stavanger, the three bronze swords stand 10m (33ft) tall and commemorate the historic Battle of Hafrsfjord, which took place here in 872, when King Harald Fairhair gathered all of Norway under one crown. The largest sword represents the victorious Harald, the two smaller ones the defeated kings. The monument, which stands for peace, unity and freedom, was created by Fritz Røed (1928-2002) and was unveiled by King Olav V in 1983.

Sverd i fjell. Photo: Øyvind Heen/fjords.com
Genesis, Sarpsborg
Genesis is a 4.5m (15ft) high sculpture in polished steel that was unveiled in Sarpsborg in 2016 during the town's millennium celebrations. The artist Finn Eirik Modahl explains: “On St. Marie's Square I have chosen to draw the lines back to the founding of Sarpsborg. The town that was founded by St Olav, and takes steps to continue to evolve in the present for the future. Who was St Olav as a young man, who was the person beyond the myths, and who is St Olav today? I chose to start with a modern youth, a human being born in our time showing great potential and ambitious goals for the future.”

Genesis. Photo: Marie Peyre
The Chair (Stolen), Steinkjer
The world's largest garden chair presides over the town of Steinkjer from the top of Oftenåsen in Nord-Trøndelag. The wooden sculpture, erected in 2013, rises 4.75m (15.5ft) high and weighs 2.5 tonnes. It was created at the initiative of Oftenåsen friends, and is a tribute to two local residents for all their hard work making hiking trails in the area. Both their names are etched into the back of the chair, which was built and erected by 12 local volunteers.

A 4.3m (14ft) tall statue of a man, looking out to sea, by artist Kjell Erik Killi Olsen. The figure, made in cast iron, holds a crystal in his hands like an offering to the sea. In the dark winter light, the crystal turns blue. This sculpture, erected in Bø, Vesterålen, is part of the project Artscape Nordland, and one of its most striking. The view is not bad either – just to the west is the distinctive silhouette of the island of Gaukværøy, while to the south one can see the whole north side of the Lofoten Wall.

The Kick Sledge (Sparken), Tynset
You would think there might not be too many contenders for the title of 'world's largest kick sledge' – and you would be wrong. For years Tynset held the record with its first oversize kick sledge, but this record was knocked down by another Norwegian town, Farsund, in 2014. That didn't last long though – in 2015, Tynset regained the upper hand, this time with an even bigger sledge (6/1 scale) – registered in the Guinness Book of Records. Do Norwegians have an obsession with giant kick sledges? That's another story. But the sculpture in Tynset has restored the pride of local residents in what is known as the unofficial kick sledge capital of Norway, and provided visitors with the quintessentially Norwegian selfie stop.