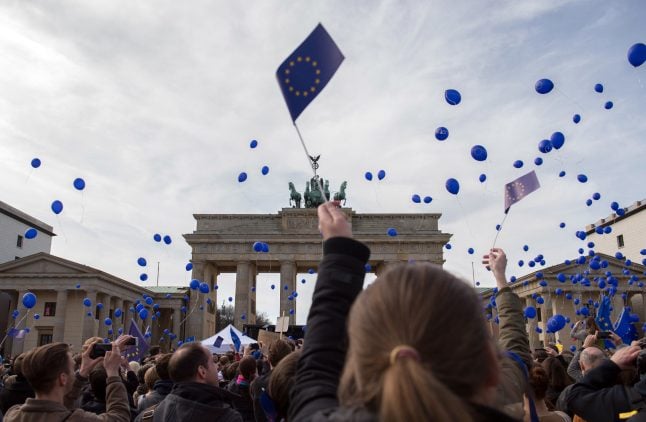 As British Prime Minister Theresa May prepares to trigger Article 50 next week, setting into motion negotiations for an EU without the UK, thousands in Berlin and other major cities took to the streets on Saturday, marking 60 years since the Treaties of Rome laid the foundations for the modern-day Union.

Brexit has been largely viewed as unpopular in Germany even before the referendum vote last summer, with a poll in early June showing that nearly 80 percent of Germans wanted their British allies to remain in the Union. A survey conducted after the vote showed that 70 percent of Germans felt the Union was good for their country, both economically and for security.

So it perhaps was not surprising on Saturday that the crowd in Berlin – which reached at least 3,500 people, according to police – appeared to be predominantly made up of Germans from all walks of life.

“We want to show that we support the European idea,” German Berliner Gerhard told The Local, before his wife Elke cut in to say: “and that we’re against right-wing populism.”

The middle-aged couple explained that they have a son who benefited from the Union, studying at Cambridge.

“We are very, very sad. It’s like like the end of a friendship and things are changing,” the couple added, finishing each other’s thoughts.

The crowd marched from one historic Berlin location to another – from outside Humboldt University where the Nazis burned books they opposed, to the Brandenburg Gate, which long marked the Berlin Wall’s Cold War division. As they walked, several Germans explained to The Local that to them, the European Union was a symbol of peace after tumultuous times, as well as of shared values.

One German demonstrator, Lisa, had a sign stating “we hold up our values” in German, explained that she has benefited from the Union creating “peace, no wars.”

“The European Union, I don’t know anything else. It’s what I’ve grown up in, and what I want to continue living in. For me there’s no other alternative. It’s unimaginable,” Lisa added.

Germany has risen to become one of the most adamant advocates for continued unity as it seeks to hold Europe together in the wake of the Brexit vote, and its leaders have also shown they were greatly impacted by the referendum results. Finance Minister Wolfgang Schäuble admitted in January that he cried when he first heard the news, and has also called Brexit a “disaster”.

Brits living in Germany and in other countries outside the UK largely supported the Remain camp ahead of the referendum, according to a survey by The Local last April. Part of this is because of how it affects them differently than those living at home.

“We’re here to raise a voice for Brits in Europe who are at the moment worried about working here still, being able to travel freely back home,” Mark Whiley from British expat group Forward Britain told The Local.

Whiley added that members of his group are also concerned about what Brexit will mean for academics conducting research across countries. Some Brits in Berlin have even thought about applying for German or other European citizenship.

“I’ve considered it, but I would hope it doesn’t mean renouncing my own citizenship,” said English teacher Jennifer Reeves from Warrington.

As the triggering of Article 50 draws closer, Whiley and Reeves said the best they can hope for is that negotiations result in Brits to have the same rights of living and working abroad.

“The least worst option is what we’re aiming for,” Whiley said. “I think there’s a lot of pressure we can put on the EU nations.”