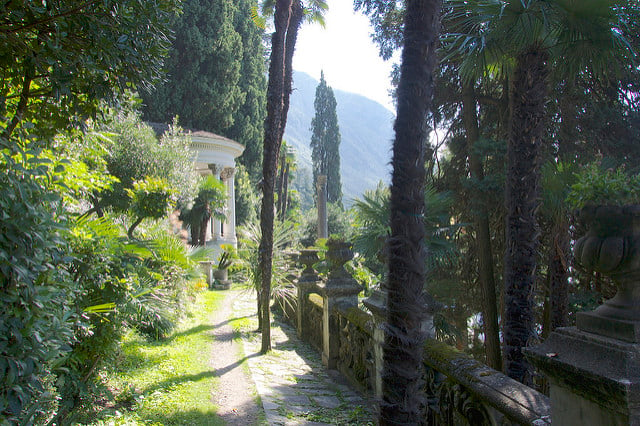 We'll start the list with a garden that's a little out of the ordinary. Arte Sella is a museum/art gallery in a park surrounded by mountains. All the artworks are made of natural materials and have been designed to interact with their surroundings. Walking the entire route takes four to five hours. Escape from Rome to visit these spectacular gardens – by car is easiest, but you can also travel by regional train and shuttle bus. The garden is split into 30 areas or 'rooms' each with a distinctive theme, offering a Mediterranean twist on the classic English style of garden. Head there in April to see the spectacular flower show.

The Boboli Gardens were the inspiration for many European palace gardens – not least Versailles – and you'll see plenty of stunning architecture as you stroll around. Work on the gardens first began in the 15th century and at one time it was the home of the powerful Medici family. Highlights include the amphitheatre, Neptune's Fountain, and the Grotta Grande (Large Cave) with spectacular sculptures and frescoes. This 200-year-old garden is one of the main sights in Sicily's capital, and home to many weird and wonderful plants. An oasis of peace in the bustling city – make sure to check out the various kinds of cacti. In Varese, not far from Lake Como, you'll find this gorgeous park – one of the best examples of an Italian villa-park the country has to offer. Relax and enjoy the flowerbeds, fountains and trees, including some exotic species such as Himalayan cedars. Entry is free!

The 19th-century castle alone is reason enough to visit, but its 22 hectare grounds include awe-inspiring cliffside views, tropical plants, and flower displays. If you're using Milan as a base, consider a trip to Lianate to take in this hidden gem, little known among tourists. Don't miss the grotto dedicated to water nymphs, or the recently restored greenhouse, and consider taking a guided tour to learn about the history of the 16th-century villa.

Try out the maze, take in the landscaped gardens, and introduce your children to the farm animals at this serene spot, which is Italy's largest garden. Explore all 60 hectares on foot, by bike or on the tourist train – make sure you allow plenty of time. These gardens were painstakingly mapped out in the 1700's, following principles of symmetry and geometry – and they remain faithful to the original design. They're free to visit, and you'll be treated to intriguing statues, views for miles, and original automata, making for an unforgettable day out.

Name-checked by German literary giant Goethe, these gardens in the romantic northern city are a must-visit. It was designed to celebrate contrasts and evoke both horror and harmony. You'll find a grotto, myriad water features, and a tower – climb it for views over the entire city. Opposite the Circo Massimo lies the Roman Rose Garden, first created in the 1930s and home to over 1000 varieties of roses. It's an ideal setting for a romantic stroll, but hides a darker past: the area once formed part of Rome's Jewish Ghetto, and housed the Jewish cemetery. Look closely and you'll see that the footpaths form the shape of a menorah in a nod to the district's past. If you're visiting bustling Naples or tourist-haven Capri, consider taking the time to explore their lesser-known neighbour Ischia, and this garden in particular. It's got plenty of character, with great views and a wide variety of plants. Music performances often take place here too, offering a treat for all the senses.

You'll want to wander round these beautiful botanic gardens for hours, and they're incredibly photogenic. Plants from almost all over the world are able to grow here, and you can enjoy views over the lake. You'll need to book a tour to see these gardens, and the guides will explain the history behind this magical spot. Prepare to be enchanted: Ninfa was at one time a busy medieval town, but was abandoned after a series of woes including struggles for ownership and a malaria outbreak. It wasn't until the 1900's that they were rediscovered and transformed into a botanical garden. Today, plants are entwined with the ruins, and you can cross the castle's moat to see inside. The only downside is that it can be tricky to get there – opening hours are limited and it's tough to reach from Rome on public transport.

Yet another option for a day trip from Rome can be found in Viterbo at the magnificent Castello Ruspoli. The property still belongs to the ancient noble family, but you can explore the amazing Renaissance garden and relax by the plants and fountains. Located in the town of Monopoli, the gnarled olive trees are the centre-piece of this garden. In total there are over 2000 species of plants from across the globe, and you should make sure you check out the incredible rock churches too.

Last but not least, it's another botanic garden, this one owned by Genoa's university. In addition to the incredible range of plants, you can see a Roman road, mosaics, grottos, and an unusual bronze dragon. This article was first published in March 2017.