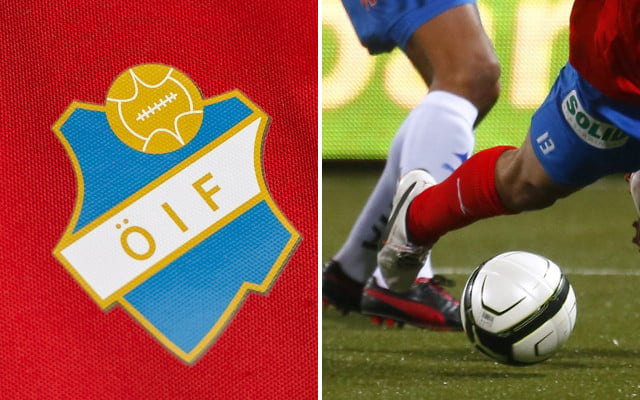 The Östers IF badge (left) and a player from a different club being booked for diving. Photo: Pontus Lundahl & Stefan Jerrevång/TT

The subject of diving – or simulation – in football has been a particularly hot topic recently thanks to questions over whether Luis Suárez exaggerated contact to win an important penalty in Barcelona's dramatic 6-1 comeback over PSG at the Camp Nou on March 8th.

Making the most of an opportunity to get one up on an opponent – even if it means exaggerating the extent of physical contact – is considered part of the modern game by many, but Östers IF in the Swedish second division think differently. In the club's new code of conduct, they have made it possible to suspend their own players if they judge that they have deliberately cheated through simulation.

“It primarily applies to the clear situations where someone is looking for a penalty and there's no contact, or similar,” Öster board member Johan Lindberg told The Local.

“We need to find fair ways to make these judgements so we don't pick out a player as a cheater when the person isn't. On the other hand, if we get a Suárez or (Real Madrid defender) Pepe in the group, we won't be scared to act accordingly. We'll be different from the big clubs if you look for example at the Barcelona-PSG match, and take an official stance for our players by acting rather than quietly accepting it.”

The possibility of suspension applies primarily to the club's first team and not at youth level, where they believe development is more important. Players judged to have simulated will first be spoken to, then if the problem continues, they can be suspended.

Öster said they accept it can be difficult to judge when someone has deliberately simulated, and will leave “grey-area situations” to the referee, but despite the challenges involved, they think it is better to act when possible rather than do nothing:

“Despite almost everyone being against simulation there are too many clubs today who don't take a stance, and we hope the debate this raises can encourage other clubs to follow us, and speed up the process of a decision being made on using video evidence to tackle the problem.”

“The issue is much bigger than just simulation. We are trying to foster the right character, among both the kids and elite, through our work. The club wants to have a person with a good character, and if we can help our players with that, their chances of going to a bigger club will grow, as will our chances of earning money. It strengthens the player's image and our club brand. Win-win,” Lindberg added.

Though the code of conduct was launched in December, it is only now being given major media attention, and Öster admit that some players are concerned there will be more scrutiny on them than their opponents. The club thinks it is worth taking a risk to try and do something about changing the culture of cheating to get ahead in sport.

“We think we can make a big difference, and that it can never be wrong to try and do something right. The future will see if we are successful in launching a change in our own organization and also in Swedish football. We both hope and believe in that,” Lindberg concluded.