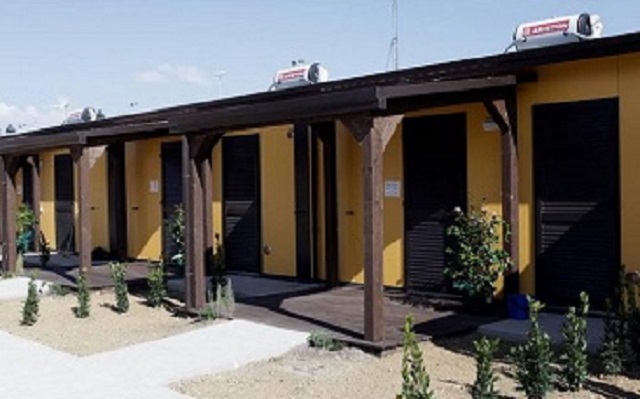 The first of the homes. Photo: Regione Lazio

Twenty-five wooden homes, known as 'casette' or 'little houses', were officially inaugurated at the town at 11am on Wednesday.

The chalets are each between 40 and 70 metres squared in size and will act as temporary accommodation while work continues on damaged homes – a process likely to take several years.

The new settlements are being built as close as possible to the original towns, with the aim of nurturing the local sense of community by keeping people together.

“This is the start of the return of people to their land,” said Lazio president Nicola Zingaretti. “We promised that they would return here, even for the intermediate stage before reconstruction, because it was right that they shouldn't have to leave.”

People with disabilities will have priority in being assigned one of the homes, the town hall said, followed by those aged over 75.

Thousands were left homeless in the disaster which killed almost 300, with many displaced residents transferred to hostels and B&B's along the coast. Many more had to leave their homes following a series of further major quakes in October and January.

In the following months, groups of residents have protested over bureaucracy and delays to the recovery effort, with one such protester telling The Local “nothing has changed” in the months since the earthquake.

And during Wednesday morning's ceremony, some residents interrupted the speeches to complain about the slow pace of rebuilding.

“You talk of reconstruction, when you still have to remove the rubble from the red zone,” said one woman, according to Ansa. “No one listens to the residents – we've waited seven months for 25 houses, or rather, containers disguised as houses.”

In total, 499 of the homes have been requested in Amatrice, and work has begun on the first 304.

Their design is based on similar settlements built in the aftermath of the 2009 L'Aquila earthquake near the devastated villages of Onna and Fossa, where thousands of displaced people still live wooden chalets and make use of wooden bars, churches and even sports facilities.

READ ALSO: How Italy plans to rebuild its earthquake-damaged towns