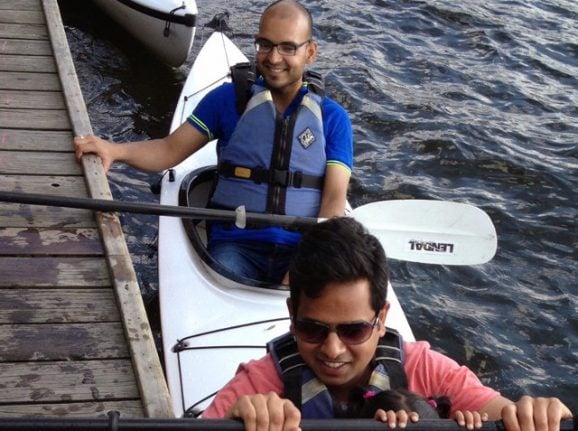 Friends Akhilesh Chadha (left) and Nitin Rawat (right) hope to give something back to Sweden with their new app. Photo: Nitin Rawat

Rawat and Chadha are from the Madhya Pradesh province in central India, but they have called Sweden home for several years now, and only met after moving there. The Nordic nation's focus on innovation as well as family life has made it a natural fit for them.

“Growing up in a small town in India there was always an emphasis on being an entrepreneur and being independent. I sold my first software product while I was still completing my Bachelors!” Chadha remembers.

“I'd never been to Sweden before, so it was a completely new place. We were expecting our first child so it was a bit scary as well as exciting, but it worked out pretty well,” his business partner notes. “We came here with the plan to stay three years and move back to India, but it’s seven years now. I have an apartment here, I've settled here, and I've even taken Swedish citizenship.”

As India does not allow dual nationality, taking another passport meant giving up the Indian one. A tricky decision, but one both are glad they made.

“It was a difficult decision because it's kind of emotional. Giving up your citizenship and officially not being called Indian. That was difficult, but practically, it was helpful.” Rawat explains. “And being Swedish is a good thing!”

Instead, both now hold OCI (Overseas Citizen of India) status, which has many of the benefits of citizenship except being able to vote, work in the government in India, or own agricultural land. “I have no intention of turning into a farmer or applying for a government job in India,” Chadha points out. It was through the process of adapting to life in Sweden that the idea for the Eday-Care app was born. When Rawat first started taking his young daughter to preschool, he found himself falling victim to poor planning, and wanted to solve that.

“When I dropped my daughter off I always had to check her in by filling in a sheet. And on some days I turned up and it was closed. They had sent the whole year's plan out in January, but I hadn’t put it in my calendar,” he recalls. “I found out by turning up and looking at a notice on the door! It was frustrating for me. So I thought, why can't I make this easier for everyone?”

He had the idea to produce an app that would make organizing preschool easier by making some of the processes digital, such as scheduling and registering attendance. He shared it with his friend, and the reaction couldn't have been better:

“Akhilesh and I are close friends, so I discussed it with him one day while walking back home, and he liked it so much he couldn't sleep on it! He called me in the middle of the night and said 'Nitin, we should do this'. That's how it started.”

After doing some research, they discovered that no app existed which made life easier for not only the parents, but also the staff at the preschools as they wanted to.

“The normal process is every preschool has to keep its check in and out records on paper for 10 years, for legal purposes. So even if parents don't sign it, the staff have to for each kid. I talked to my daughter's preschool principal and we figured out how to solve this not only from our perspective, but also from the school. To also make things easier for the staff, who aren't necessarily tech savvy,” Rawat details. Turning the idea into a fully realized app wasn't going to be easy however. Both still have full time jobs in the tech sector, so they pulled double shifts by going to work during the day, then coming home and working on the app in the evenings.

“That's very tough to say the least,” Chadha says. “Ultimately you need a lot of support from your family, and I'm very lucky that my wife has always been helpful and encouraging. I'd like to give credit to her.”

“It's a challenge, but a fun challenge,” Rawat adds. “We spent many nights doing reviews because it can't impact our day job. But if you work eight until four or five like in Sweden, and then go home to take care of the kids, after that you can work at night. I think we have a lot more time in Sweden to focus on other things, if people want to do it.”

And without their day jobs, the entrepreneurs couldn't have funded their app.

“The tricky part is getting funded,” Chadha observes. “There is so much competition in the start-up space and unless you have really proven your product, you can't get any funds. We decided to self-fund the product until we prove it really works.”

One helpful way of cutting costs was having the technical side of the app built back in India, he explains:

“We would have loved to do it in Sweden, but hiring four to five IT geeks is pretty damn expensive. We've done it at a fraction of the cost.”

Useful help has been available in Sweden though. A pilot project in collaboration with the Futuraskolan international preschool has been particularly valuable as it has provided important feedback on the app's performance.

“I think that's the key to success. If you get really good feedback, get people to try your stuff, and can build on that, then no one can stop you from succeeding,” Rawat recommends.

“We're really proud that almost every user invited to use the app has been positive about it, from parents to school principles,” his partner adds. The target is to get the app used in at least 20 preschools in order to make it sustainable financially. After that, they have ideas for updates which can further help Sweden's preschools.

The entrepreneurs hope their experience can inspire other immigrants in Sweden.

“There are so many people with immense talent moving to Sweden for one reason or another. We want to prove that it isn't difficult to be an entrepreneur no matter where you come from. With such an advanced digital society, there are infinite opportunities to be seized,” says Chadha.

So how would they sum up the Swedish experience to anyone considering following in their footsteps?

“I think the people are really helpful, and no one tries to dent your motivation. It's a very open society, and if people like me and Akhilesh who are open to taking feedback go out and ask for it, they will help you,” Rawat concludes.