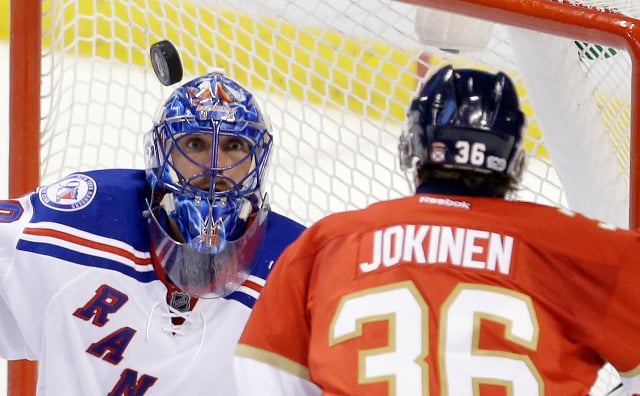 The 35-year-old Swede made 43 saves in the Rangers' 5-2 victory over Florida on Tuesday, moving into 10th on the NHL's all-time win list for goalies with 404, but sat out New York's 4-3 loss to Carolina on Thursday.

Lundqvist, nicknamed “King Henrik” for his skills in the crease over 12 NHL seasons all spent with the Rangers, helped Sweden win gold at the 2006 Turin Winter Olympics and captured the 2012 Vezina Trophy as the NHL's top goaltender.

This season, Lundqvist is 30-17 with two overtime losses, two shutouts, a 2.65 goals against average and a 91.3 percent save ratio over 51 appearances.

Lundqvist was replaced in the Rangers' lineup by another Swedish netminder, 25-year-old Magnus Hellberg, called up from the Rangers' top developmental club.

With 43 wins and 88 points from 68 games, the Rangers own the first wildcard playoff berth in the Eastern Conference.

In the worst-case scenario, Lundqvist would miss 11 games for the Rangers and return only for the final week of the regular season.