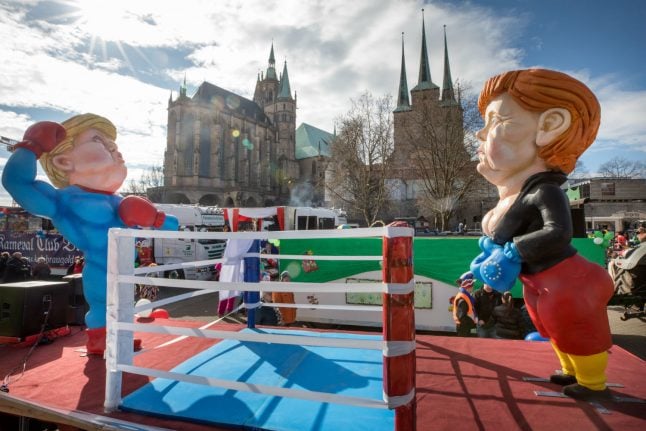 To say that Chancellor Angela Merkel is unlikely to be personally enamoured by US President Donald Trump is something of an understatement.

His blustering, boasting personality is completely at odds with her own no-frills leadership style. She is also well-known to have little time for statesmen too eager to prove how tough they are.

If that were not enough, Trump has personally insulted Merkel on several occasions. Employing his keen eye for detail, he has accused the Chancellor – under whom Germany has reached record unemployment – of “ruining Germany.”

But if there is one attribute that marks Merkel above all else, it is not letting the personal get in the way of the political.

She knows that this is one of the most important diplomatic missions she has been on in a long time, and she knows she has to get it right.

So it was revealing to read in Spiegel last Friday that Merkel is bringing along a couple of buddies on her trip to Washington.

Flanking her will be Siemens boss Joe Kaeser and BMW chief Harald Krüger.

According to Spiegel, the heads of two of German industry’s powerhouses have been invited along “to ensure a good atmosphere with the former businessman and to dissuade him from entering a trade war with Germany.”

In other words, Merkel is bringing along two guys who speak Trump's language: money.

And she has good reason to see this as a concern – a good deal of German wealth is based on trade with the US, which was Berlin's third most important trading partner last year.

Trade with the US accounted for €165 billion in 2016. But the problem – at least from Trump’s point of view – is that German companies do much more trade in the US than vice versa. Last year Germany had a €49 billion trade surplus with America.

And the billionaire businessman didn’t take long to start rattling his sabre in Berlin’s direction after his inauguration. He threatened BMW with huge import duties if it builds a factory in Mexico. His top trade advisor, Peter Navarro, meanwhile has accused Germany of “exploiting” the US by means of an artificially low euro.

By bringing along Kaesar and Krüger, Merkel clearly hopes to offer evidence that good trade relations are in both countries' interests.

Both Siemens and BMW have a big presence in the USA. Siemens has 50,000 US employees in all 50 states. BMW meanwhile recently expanded its South Carolina factory to make it its largest in the world, bigger even than the one outside BMW hometown Munich.

The CEOs will lay out to Trump that German companies are creating jobs for American workers, not taking them away, Spiegel reports.

But Merkel will be bringing another hard truth to the President's door: if the US wants to talk trade with Germany, it will have to go through the Brussels.

In recent weeks the Trump administration has made noises about entering bilateral talks with Germany about reducing the US trade deficit.

Speaking in Brussels earlier this week, Merkel told reporters that she would make clear to Trump that trade was an EU responsibility not a German one.

Explaining a basic element of how relations with Europe works to a US president will no doubt be a first for the Chancellor – but Trump has left her with little choice.

There will be other matters on the table too.

Die Zeit reports that Trump is interested in hearing Merkel’s opinion on Russian President Vladimir Putin. He is reportedly also keen to hear what the US can do to support German-French efforts at securing peace in east Ukraine.

While one might wonder where Trump’s sudden eagerness to solicit other opinions has come from, Merkel and her entourage will no doubt be happy to have such a conversation as well.

She received assurances from Vice President Mike Pence in Munich last month that the US is still committed to Nato.

But Trump himself has described the military alliance as obsolete. The Chancellor will no doubt want to hear from the man himself that this was little more than one of his famous slips of the tongue.