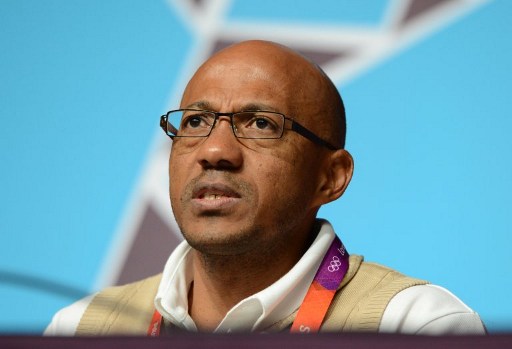 Frankie Fredericks won silver medals in 1992 and 1996. Photo: Findlay Kember/AFP
Fredericks, 49, strongly denied any wrongdoing in accepting nearly $300,000 (283,000 euros) on the day that Rio de Janeiro was awarded the 2016 Olympics.
But he said he had “personally decided that it is in the best interests of a good functioning of the International Olympic Committee candidature process that I step aside as chairperson of the 2024 Evaluation Commission, because it is essential that the important work my colleagues are doing is seen as being carried out in a truthful and fair manner”.
The Namibian athletics great went on: “I do not wish to become a distraction from this great contest.”
The Lausanne-based IOC later said Switzerland's Patrick Baumann, the general secretary of the International Basketball Federation, had been named as Fredericks's replacement.
The IOC is to decide in September whether Los Angeles or Paris gets the 2024 Olympics. But the decision faces greater scrutiny because of corruption allegations over recent Olympics.
Fredericks's announcement came one day after he also stepped down as a member of an International Association of Athletics Federations (IAAF) task force working on getting doping-tainted Russia back into global sport.
'Negative insinuations'
Le Monde newspaper on Friday said Fredericks, a four-time Olympic silver medallist, received nearly $300,000 from Papa Massata Diack, who is wanted in France on bribery charges.
Fredericks received the sum from Pamodzi Sports Consulting, which is owned by Diack who, alongside his father and former IAAF chief Lamine Diack, faces charges in France over millions of dollars paid to cover up doping failures by Russian athletes.
French investigators are also looking into the possibility that bribes were paid over the awarding of the 2016 Olympic Games to Rio and the 2020 Tokyo Games.
Three days before the IOC awarded the Games to Rio on October 2nd 2009, Brazilian businessman Arthur Cesar Menezes Soares Filho paid $1.5 million to Papa Massata Diack.
Another payment of $500,000 was made around the same time to another account belonging to Diack in Russia. At the time Diack was a marketing consultant to the IAAF, led by his father.
Fredericks, a former 200m world champion, has said he had a consultancy deal with Diack's firm.
“I categorically deny any direct or indirect involvement in any untoward conduct and confirm that I have never breached any law, regulation or rule of ethics in respect of any IOC election process,” Fredericks said in his statement.
“The articles do not only target me, they target the integrity of the International Olympic Committee bidding and elections process for host cities altogether.
“Of course all election processes should be seen to be free and fair. This is why I have been and am still actively cooperating with the IOC Ethics Commission in order for them to conduct a proper and independent investigation.”
Fredericks said he had made a statement to the IOC ethics commission on the case and “will continue to give my full cooperation to a proper investigation of these reports and then await the outcome of this independent process.
“It is of course in my highest interests to clear myself of the negative insinuations against me and my role within the IOC as soon as possible in order to prevent any further damage to my reputation and that of the IOC.”
The Namibian was one of the star sprinters of the 1990s.
Running in the 100 metres and 200 metres, he won two silver medals at the 1992 Olympics and two more at the 1996 Games. He is Namibia's only Olympic medal winner.