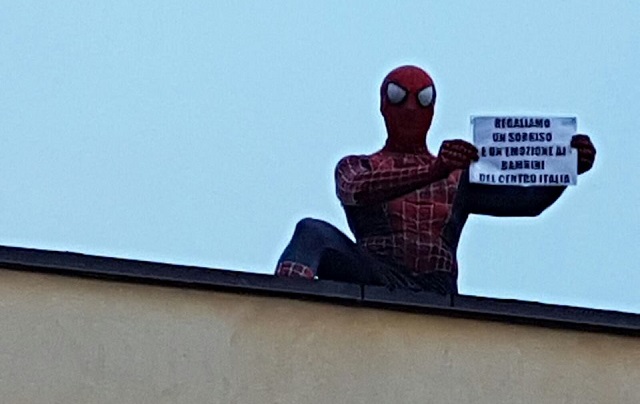 The activist had a message for Amatrice's children and Italian authorities. Photo: Andrea Torricelli/Comix

“I think it is a duty to do something – anything – to make sure you don't forget, and at the same time to tell these people they are not alone,” Merlino told The Local.

Though he has no personal ties to the central Italian region, he wanted to help residents of Amatrice, which in August last year was hit by a deadly earthquake. And the activist – who has donned superhero costumes in aid of various causes in the past – decided that dressing as a beloved comic book hero was the way to do it.

READ ALSO: How Italy plans to rebuild its quake-damaged towns

The stunt had “a carefree message, but very serious intentions,” explained Merlino.

“On one hand I wanted to cheer up the local children; on the other hand, I wanted to call on institutions to set aside bureaucracy, and to act promptly,” he said.

The reason for making the 450km journey on foot was to raise awareness along the way: setting off in January, he passed through large cities including Bologna and Rimini.

“On the way, I met many people and encouraged them to join in not only in the protest, but also with small gestures of true solidarity. Perhaps you can't build a house, but at least you can warm hearts and show the families who sometimes feel abandoned that you are thinking of them,” said Merlino.

Once he had reached Amatrice, he climbed on the roof of a building – much like the real Spiderman – together with a group of other volunteers dressed as superheroes and beloved fictional characters.

The volunteers dressed in costumes representing fictional heroes and villains, “all united for central Italy”, as Merlino put it.

Residents of the affected central Italian towns have carried out repeated protests in Rome at perceived delays in help rebuilding their homes and livelihoods. “Bureaucracy kills more than the earthquakes,” is one of the slogans used on demonstrators' banners, and one of the protest organizers told The Local in January that “nothing had changed”, five months on from the disaster.

Further protests have been taking place throughout February and March, with mayors from across the Abruzzo region gathering in Rome on Friday morning calling for urgent help.

In many of the towns, the temporary housing promised by officials in the wake of the earthquakes has yet to arrive. A large proportion of the thousands left homeless are still living in hostels and hotels far from their homes and businesses.

As for Merlino, he told The Local he was planning to organize a large demonstration – “in costume, to get attention and make people happy” – to raise awareness of issues affecting the earthquake-damaged towns.

“I'll continue this clean, non-political path to raise awareness of problems related to the crisis,” he said.

NOW READ: After the earthquakes, here's why you should still visit central Italy Castelluccio, one of the damaged towns. Photo: Filippo Monteforte/AFP