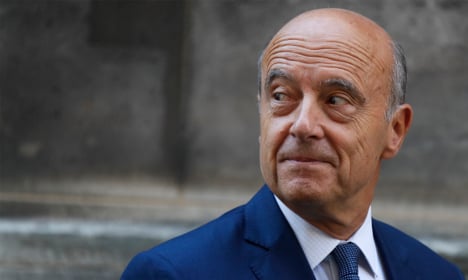 All photos: AFP
Juppé was handsomely beaten by Fillon in November's primary which appeared to signal the end of his longstanding hopes to become French president.
But Fillon's campaign seems to be collapsing around him, despite his determination to never “surrender” and fight to the bitter end.
There is growing talk among Fillon's centre-right Republicans party that the only man who can save the day is Alain Juppé.
Juppé himself has appeared reluctant but if called upon he would surely grab the chance to fulfill his life long dream as well as save the French right, who only a few months ago were considered certain to win the 2017 presidential election.
And if he does come back, then here's what you need to know about him.
Firstly….He's been around forever
Ever since he graduated from l'ENA (Ecole Nationale d'Administration), France's elite university, 71-year-old Alain Juppé has devoted his life to politics. He has been a European MP, Prime Minister under former president Jacques Chirac, the deputy mayor of the 18th arrondissement of Paris, and the mayor of Bordeaux for 20 years.
… and he's Bordeaux's superhero
As Bordeaux's long-standing mayor, he's been credited for giving the city a new life where he enjoys widespread popularity. The construction of the tramway network has revamped Bordeaux and asserted its position as one of the most popular destinations for tourists.
He upholds that by having spent so many years in local politics he is “on the scene” and has witnessed the real troubles that affect everyday people's lives. Juppé by the Wine Civilisations Museum in Bordeaux
He was part of the infamous student riots of May '68
… and voted for the Communist Party. However he radically switched sides when he joined former president Jacques Chirac's conservative party a few years later. He has been a loyal right-wing politician ever since and was president of the UMP (Union pour un Mouvement Populaire) from 2002 to 2004.
He speaks perfect English
Whilst Hollande has been ridiculed for his almost non-existent level of English, Juppé postitively soars. And unlike many of his colleagues, Juppé doesn't grumble or pull the customary confused face when someone doesn't speak to him in his native langue.
Instead, he has learned the language properly and is one of the few French politicians who can hold confident English conversations.
A man also tainted by scandal
It was uncovered that whilst he was deputy-mayor of Paris, Juppé arranged for the rent to be lowered on his son's state-owned flat. Meanwhile, he carried out renovations on his own flat using several million francs of taxpayer's money and also benefited from low rent prices.
His popularity plummeted even further when in 2004 he received a 18-month suspended sentence for his involvement in a fictitious jobs scandal which shook Chirac's RPR Party.
He was found guilty of wrongdoing in a scam in which Paris City Hall funds were used to pay political party allies in the late 1980s and early 1990s. His conviction was for “the use of public office for personal ends.”
Juppé has been open about the scandal but he has always insisted he personally did not gain from the wrongdoing (unlike François Fillon, whose family earned almost €1 million in total from being parliamentary assistants). In the end many saw him as taking one for the team, or the party, in other words he was the fall guy for Chirac himself.
He went from 'next French president' to….Quebec
Juppé had been favourite to succeed Jacques Chirac as president in 2007 but the conviction derailed his plans and he ended up teaching at a university in Quebec. And the man to take advantage of his fall from grace in 2004 was none other than Nicolas Sarkozy who became president after Chriac.
… but then he became the most popular politician in France
His popularity has since reversed. He was named France's most popular politician by GQ magazine in 2014 and has been at the top of the popularity scale ever since.
Surveys before November's primary showed that 63 percent of the population had a favourable opinion of him, but since his defeat Emmanuel Macron, the rising star in the 2017 has taken over the mantle as France's most popular politician. For now. He wants to make France happy
Despite being teased by his opponents in the run up to the primary, who claim that he was too naive or unrealistic, Juppé insisted that France could only get through its difficult times if it introduced the idea of a Happy Identity (l'identité heureuse). It's a stance he took to counter the idea of National Identity, advocated by other politicians and in particular Nicolas Sarkozy and far-right Marine Le Pen.
He defended himself, saying: “Of course I can see that France is suffering, but what should I tell the French people? That they're going to suffer even more? My message is a message of hope, and that's what l'identité heureuse is about.”
“Our strength is our diversity,” he says. He likes privatisation
Whether it's motorways, banks, phone companies or Air France, he has played an important role in privatising industries since Chirac's election. He's especially motivated when the funds can go towards the development of Bordeaux, which has drawn criticism in the past.
He wants to scrap the 35-hour work week
Juppé is promising to ditch the current 35-hour weekly work limit to bring it back up to the previous 39 hours. A move that will doubt spark some criticism but that no president has dared to discuss since it came into effect in 2000.
Juppé is also looking at pushing the age for retirement back to 65 instead of the current 62 years. He also promised to significantly reduce public spending by around €85 to €100 million, a move that 82 percent of the population supports.
He wants to scrap some 200,000 public sector posts as well as a wealth tax. For more information on how his programme squares up to Fillon's CLICK HERE.
… and the border agreement with the UK
Juppé has said in the past that the agreement which allows Britain to have its border in Calais, northern France, must be renegotiated in light of the migrant crisis.
By James Vasina