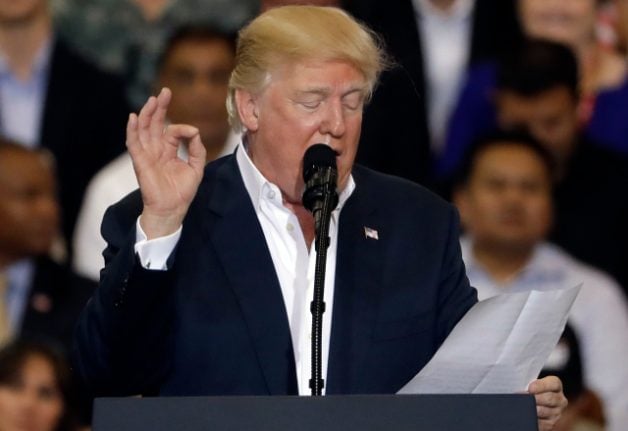 Well, who would believe this? Least of all the Swedes, it soon turned out.

Trump later clarified his comments, but not before causing major confusion after a fairly quiet Friday in the Nordic country, where some of the biggest stories had included a man setting himself on fire for unknown reasons in Stockholm, talk about Eurovision try-outs, and a picture of an elk humping a wooden elk.

Emma Johansson meanwhile, a librarian briefly in charge of Sweden's citizen-run Twitter account, suddenly found herself thrust into the global spotlight after people turned to her to ask what had happened in her usually so peaceful country, forcing her to come out and debunk the many rumours afloat.

She soon found herself fielding calls from some of the world's largest news outlets.

“I'm just a regular school librarian,” she tweeted, incredulous at her sudden fame.

Goodnight! Have a face-palm from me. Going to bed now. Rest assured that ALL IS FINE HERE! *falls headfirst in bed* pic.twitter.com/bIzUKmtmVa

Trump later confirmed the statement had been “in reference to a story that was broadcast on Fox News concerning immigrants and Sweden”. Said story was an interview with filmmaker Ami Horowitz, who asserted on air that “there was an absolute surge in both gun violence and rape in Sweden since it began its open door policy”, referring to Sweden's record influx of asylum seekers in the past few years.

Several Swedish officials, ordinary Swedes and even the police officers interviewed in the video – who claimed their quotes had been taken out of context – have disputed these claims, but it is just the latest in a long line of exaggerated or false stories peddled by media outlets such as Breitbart, RT or the Daily Mail.

And for Swedes, such as the author of this article, who are used to being portrayed as a happy, meatball-eating people dancing to Abba while enjoying their long parental leave – another exaggerated international image not strictly accurate either – the sudden rise in negative reports has come as somewhat of a shock.

“There are two 'images' of Sweden. The welfare society and the little red cottages, and another image that has spread ever since problems for Jews in Malmö were raised in 2012. Fox News has in fact several times linked back to that,” Olle Wästberg tells The Local. A journalist, diplomat and leading politics expert in his native Sweden, Wästberg also served as Consul-General of Sweden in New York for several years.

Meanwhile, there is an ongoing domestic debate, where many do argue that Sweden has long been too willing to accept new arrivals. It received 163,000 asylum applications in 2015, but after tightening its rules and borders, the number dropped to fewer than 30,000 in 2016. The debate is widely thought to have boosted anti-immigration party the Sweden Democrats, currently polling at around 18 percent.

“You should also remember that there are Swedish groups who market this image. There are Swedes who write for Breitbart,” says Wästberg about the self-described alt-right platform of which Trump adviser Steve Bannon is a former executive.

But let's take a step back from politics and look at the facts.

As Horowitz states in the interview on Fox News, Sweden's national statistics on crime are publicly available, presented by the National Council on Crime Prevention (Brå) online.

The 2016 figures are preliminary statistics compiled by Brå.

It is hard to see when in the past few years this “absolute surge” took place. In fact, deadly violence in Sweden is still around 1 per 100,000 people, compared to 5 per 100,000 in the US, according to an FBI cited by the TT newswire.

But as history shows, once a lie sticks, it is hard to get it unstuck. In the 1960s, Dwight D Eisenhower claimed in a speech that Sweden's welfare policies had contributed to a high rate of suicide, thus starting a still oft-quoted myth that Sweden has the highest suicide rate in the world (it doesn't).

“60 years later, that's still around, which shows how these things survive,” says Wästberg.

Sweden has already taken steps to debunk some of the rumours, with its embassy in the US tweeting that it “looks forward to informing the US administration about Swedish immigration and integration policies”.

“Sweden is a small country which relies on foreign trade. We are dependent on having a good reputation, that investors dare to invest in Sweden because they know that there is some kind of continuity, so these stories spreading is negative for Sweden for economic reasons,” says Wästberg.

In the Fox News interview, it is also claimed that “Sweden had its first terrorist Islamic attack not that long ago”. It does not specify what that refers to, but a suicide bomber did try to launch an attack in Stockholm in 2010 – years before the refugee influx of 2015. He managed to kill only himself.

The far-right sword attack on a school in Trollhättan in the autumn of 2015 was far more deadly, but does not get a mention in the Fox News clip. There have not been any other terror attacks linked to Islamism in Sweden in recent years. An incident at a Malmö mosque last year – which was claimed by Isis but not considered a terror attack by a Swedish court – caused only minor smoke damage to the building.

This is not to say that Sweden has not struggled with its unprecedented wave of immigration. Unemployment among foreign-born people is still significantly higher than among people born in the country, there are reports of rising segregation and many describe feeling less safe than they used to.

But these are important issues, which Sweden takes seriously. Does Donald Trump?

COVID-19
Europeans harden views towards US and EU after pandemic