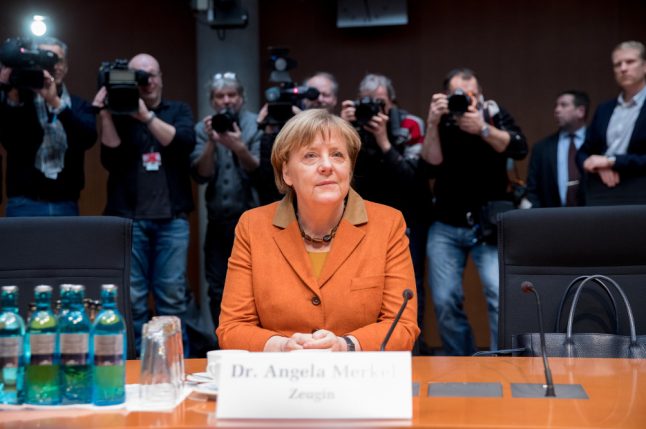 Angela Merkel before the investigative committee on Thursday. Photo: DPA.

News broke internationally in 2013 of the extent of the US National Security Agency’s (NSA) global surveillance through information from American whistleblower Edward Snowden – stockpiling millions of phone records, online chats, and even reportedly tapping into Merkel’s cell phone.

“Spying among friends – that is simply not done,” Merkel said at the time. “The Cold War is over.”

But those words rang hollow after it later emerged that Germany’s intelligence agency, the BND, had worked with the NSA and surveilled its own allies.

In the wake of these reports, Germany announced it would replace the BND head, and put a tighter leash on its own spies.

Merkel on Thursday is appearing before a parliamentary inquiry committee that has been investigating Germany’s own surveillance and work with the NSA. The questioning is expected to go on for hours.

The MPs do not accuse Merkel of deliberate deception, but they do expect to ascertain what she did know and could have done to prevent the spying, said Social Democrat (SPD) committee representative Christian Flisek.

Green party representative Konstantin von Notz said that “spying among friends” was in fact very much a reality.

“With that said, it is a problem if you misled the entire German public,” von Notz said of Merkel's prior statement.

Merkel’s testimony will likely be the conclusion of questionings by the committee, which has met over the course of roughly three years since the Snowden revelations, and conducted more than 100 sessions examining the surveillance programme of the NSA, BND and others.

The committee hopes to have its final report completed by the end of June.

Martina Renner of Die Linke (The Left Party) said that she wants to learn from Merkel how she intended her statement about spying – as indignant commentary on the NSA, or as a hint to the BND.

In 2013, the German government had also failed in an attempt to come to a ‘No-Spy’ agreement with the US. Flisek called this and the government’s overall handling of the affair a deliberate, deceptive action.

“The so-called No-Spy agreement was a large-scale deception of the German public, because the USA was never ready for such a pact,” he told the Passauer Neue Presse.

The chair of the committee from Merkel’s own CDU party, Patrick Sensburg, said he expected the Chancellor to above all focus on political issues.

“This in particular includes her statement: ‘Spying among friends – that is simply not done’. And that includes eavesdropping on cell phones,” he told Berliner Zeitung.

“Apart from that, the Chancellor should make clear how the organizational and technical deficiencies of the BND could be eliminated.”