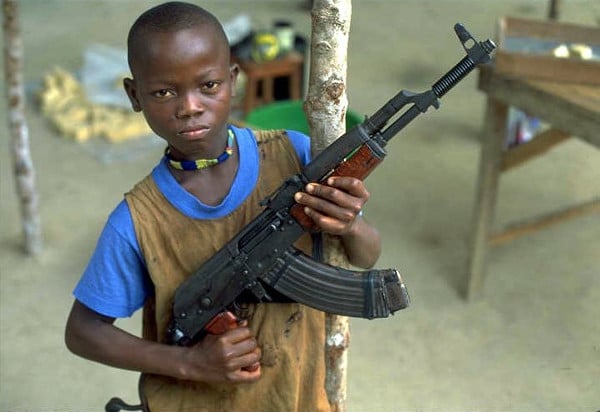 A child soldier in Sierra Leone in 1997. Photo: UNICEF/dpa

Michael Davies from Sierra Leone was once a child soldier fighting in the civil war-torn west African country. His weapons of choice: German.

“When I had to fight as a young person in Sierra Leone, I saw many G3 rifles,” Davies said in a statement regarding the German-made Heckler & Koch gun.

“Weapon deliveries to conflict regions urgently need to stop. They inflame the conflicts.”

Davies is far from alone in his experience with German weapons. A new report by the German Alliance for Child Soldiers and other non-profits found that there are currently around 250,000 child soldiers in at least 20 conflict-ridden countries who are forced to spy, fight, carry supplies and even be sex slaves. And often German arms end up in these child soldiers’ hands.

“The study proves that Germany delivers small weapons of the deadliest kind to many conflict regions – also those where child soldiers are deployed, for example in the Middle East, India, Pakistan or the Philippines,” said Ralf Willinger, children’s rights expert and spokesman for the child soldiers alliance, in a statement.

“Germany is thus jointly responsible for the escalation of armed conflicts and the suffering of children in these countries.”

Germany exported €47 million-worth of small arms in 2016 – €15 million more than the year before, the study notes – an increase of nearly 50 percent. More than a third of these exports end up going to countries outside of the EU or NATO.

German law forbids the export of weapons to conflict-torn countries, but the report says weapons still manage to cross borders illegally. On top of that, German weapons may be licensed to be produced in other countries, but where they go afterwards becomes unclear.

“Above all… many German weapons are attained through legal or illegal reselling to conflict zones, or were already there before the outbreak of the conflict due to existing licensed production,” the report states.

Examples in the report of this spread include Colombia, where during the country’s decades-long conflict, child soldiers were used by guerilla groups like FARC. Until the 1990s, German weapons were the standard of the country’s military, according to the report. But these weapons ended up with FARC through illegal reselling. Germany halted the direct sale of arms to Colombia, but their weapons also were smuggled in through Ecuador.

Another example is Yemen: Saudi Arabia is one of Germany’s biggest arms purchasers, and it is also involved in conflict in Yemen, where child soldiers are often used.

The report calls for a reform and standardization of legislation regarding weapons exports, such as considering the use of child soldiers in criteria for authorizing exports.

It also calls for Germany to lift its own military recruitment age to 18. Germany allows 17-year-olds to join the Bundeswehr with parental permission, though they are limited to using weapons during training, and are not sent on international missions.

According to NGO Child Soldiers International, a large majority of countries worldwide only recruit people over 18 into their military. Germany still holds on to an exception under international law that allows those under 18 to volunteer as long as it's not for violent conflicts.