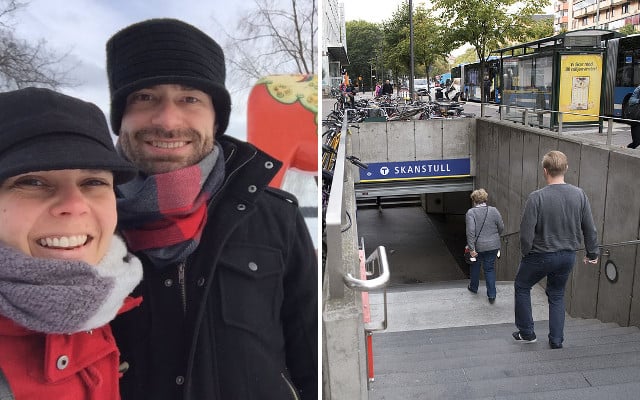 Kevin and JoEllen Buckley have swapped their cars for public transport since moving to Stockholm. Photo: Kevin Buckley & Jessica Gow/TT

Without a doubt, one of the most drastic changes to my day-to-day life since moving to Europe has been not having a car. As anyone who lives in the States knows, driving a car is most often the only way to get around. However, this is not the case in Europe: most cities have extensive public transportation systems. So before taking the flight across the Atlantic, JoEllen and I sold our cars and began life without four wheels.

We were happy to find that Stockholm’s public transit system is one of the best any city can offer. After a few personal failures (I once made it into the subway as the doors were closing, leaving JoEllen on the other side… on Valentine’s Day), we learned that living without a car comes with both positives and negatives. If I had a car here, my drive to and from work would take about 35 minutes. Instead, my morning commute takes almost an hour. It starts with a a five minute bus ride, to a 30 minute train ride, and finishes with a 15 minute walk to school.

First, let’s talk money. To use Stockholm's public transport, all you need is a prepaid card so that you can beep yourself onto the bus, metro, tram, train, whatever. JoEllen and I knew we would be staying around for a while so we decided to buy a one-year pass that cost 8320 kronor (roughly $936). That's it. No more car payments, monthly insurance drafts, gas fill-ups, tag renewal fees, mechanic bills, depreciation, or speeding tickets. Money is not the only green thing saved by using public transportation: it is also much better for the environment. For example, mass transit such as the Stockholm tunnelbana (metro) not only saves fuel, but produces 76 percent less greenhouse gas emissions per passenger mile than a single driver in a car. Since using public transport forces people to walk more, it is also more beneficial for overall health. According to my Fitbit, I walk on average two miles more per day that I did when I owned a car, which saves calories for more food and beer.

Speaking of beer, the option of taking public transport can literally be a lifesaver. If a person chooses to have a few beverages, they have a safe way to get home without harming themselves or others and without getting in trouble with the law. Friends can enjoy going out together without assigning a designated driver for the evening.

Not owning a car also highlights how much stress driving can cause. Worrying about getting in an accident, careless drivers, and – most of all – traffic is eliminated when taking the tunnelbana or pendletåg (commuter train). As I hear that traffic is getting worse every day Nashville, I am thankful to jump onto public transit and enjoy the ride.

Not being in control of the vehicle also allows travelers to engage in other activities that would be impossible while driving. JoEllen loves to read during a commute, while I tend to play on my phone or practice learning Swedish.

Almost all of Stockholm's stations have a Pressbryån, a nice little shop to pick up a snack for your commute. I love my routine of getting a coffee every morning from the same little shop, saying hello to the ladies who work at the store, then sipping coffee on my train ride to work.

Stockholm as a city also has a few perks that make its public transport all that more special. Our friend Linda, who was once a Stockholm tour guide, once told me that one third of the city consists of water, another third of nature, and the remainder of developed city. This means that the views of the city as you commute are often stunning.

One of the best parts of my day is walking over a bridge on my way to school that has a beautiful view of Stockholm. The weather mixed with the constantly changing hours of daylight this far north cause the same view to have different nuances everyday. There is always something new to appreciate. No matter how good or bad my day is, I pause here for a brief moment to remind myself I am lucky to be living my dream of teaching in Europe. These photos were taken from this bridge on my way to work during the same week. Stockholm is also one of the only cities in the world that includes ferries in its public transport system. Without paying extra, locals and tourists can take a trip across water and enjoy the views. Additionally, more than 90 of the 100 subway stations in Stockholm have been decorated with sculptures, mosaics, or paintings from 150 artists. The Stockholm tunnelbana system, 110 kilometers long, is said to be the world’s longest art exhibit. The blue line that JoEllen and I live on is particularly beautiful.

Now for the negatives. I can't deny that sometimes I just miss the feeling of driving down the road alone, with the windows down, radio up, and singing as loud as I want. Now, instead of having my own little bubble and some alone time, I am lucky to get a seat that is not directly next to a stranger (and I don't think they would appreciate my singing voice too much).

Having a car also allows a driver to be on their own schedule, there are few things worse that getting to the train station after a long day at work only to see the doors shut in your face and have to wait 15 minutes for the next, especially during Swedish winters. Every so often there are issues with the public transit that force trains to be delayed. Not only can timing public transit be difficult, but finding the particular bus or train stop you need can be as well. JoEllen and I have had many stressful moments wandering around trying to find the best way home. Getting to certain residential areas outside of the city without a car can also be difficult because transit lines, though extensive, are limited. Certain bus routes also pause during the late hours of the night, so if you miss the last one, you'll have to cough up cash for a taxi.

Overall, JoEllen and I are enjoying this phase of life without a car. However, we do look forward to getting back behind the wheel when we take our summer trips home to Nashville.

Kevin and JoEllen Buckley moved from Nashville, Tennessee, to Stockholm two years ago. Read their blog here. Do you want to write a guest blog post for The Local? E-mail [email protected].