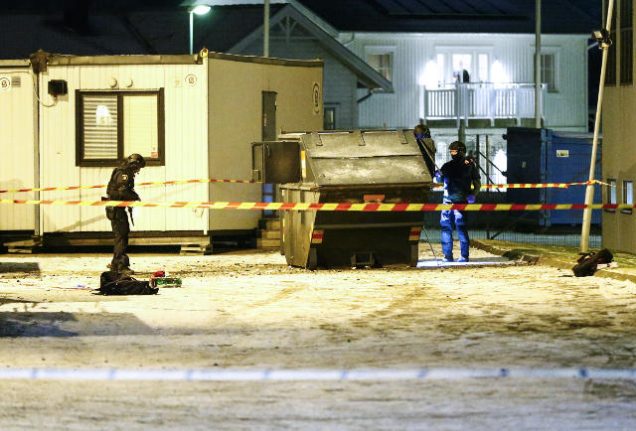 Police technicians investigating the site of the blast in Gothenburg. Photo: Thomas Johansson/TT

The three suspects “are or were in the past members of the Nordic Resistance Movement”, a neo-Nazi group, said Mats Ljungqvist of the anti-terror prosecutor's office.

An enquiry is underway into the blast outside the centre in the southwestern city of Gothenburg on January 5. It left an immigration office staff member seriously injured with wounds to his legs.

One of the suspects in the bombing was taken into custody earlier this month. The two other arrests were made on Wednesday and Thursday.

The Swedish intelligence service Säpo said in a statement that the attack, which has been linked to two others in Gothenburg in recent months, appears to have a political motive.

The first incident took place on November 11th, when a bomb went off outside the Syndikaliskt Forum Kafe, a well-known far-left haunt. No one was injured in that blast.

Then an explosive device was found on January 25th at a campground which was temporarily housing migrants. It failed to detonate.

All three explosive devices were “placed in public areas” and there are other elements which suggest that they are linked, said Ljungqvist.