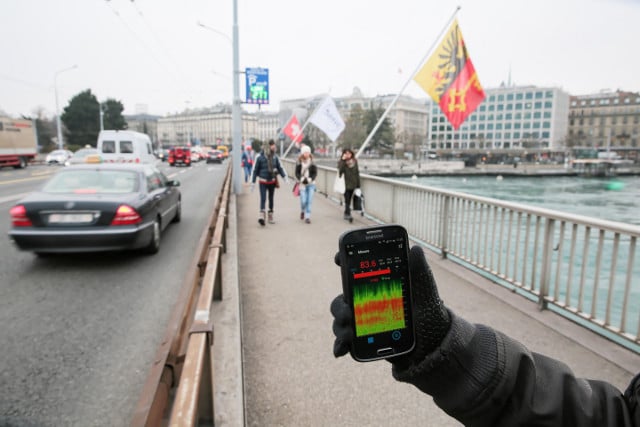 Photo: Alain Herzog/EPFL
The new NoiseCapture app (for Android phones only) can record the noises – both pleasant and unpleasant – that residents hear going about their daily life in order to build up an ‘sound map’ of the area.
While car horns, construction noise and other man-made sounds are integral to the plan, natural sounds such as birdsong and running rivers are also useful as “they will help us learn more about the canton’s biodiversity,” said EPFL researcher Stéphane Joost in a statement.
Once installed on a smartphone, the app geolocates the sound and logs the number of decibels, frequencies, date and time of the recording. Users can also take a picture of the location, evaluate the sound’s ‘pleasantness’ and add a comment, for example noting whether it’s a mechanical sound or a natural one.
The project coordinators even plan to hold NoiseCapture parties where people can make simultaneous recordings on a certain street or neighbourhood.
“We’ll use an artificial-intelligence based algorithm to crunch the data. The more data people send in from all over Geneva Canton, the more accurate and meaningful the sound map will be,” said Joost.
Last November a study by Swiss Statistics said Geneva was the noisiest city in Switzerland, with more than 60 percent of people having their sleep disturbed by night-time traffic.
Noise pollution is often linked to health problems including stress, insomnia and hearing damage, said EPFL, adding that the NoiseCapture project should allow the canton to become better equipped to address the issue.
The Geneva project is part of a wider European study based on open data and led by a lab in Vannes, France.
Download the app here.