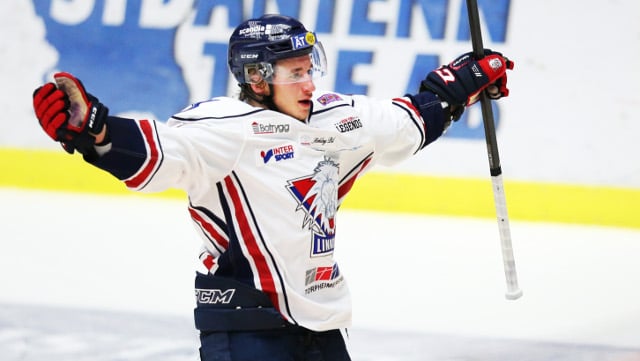 Jakob Lilja was banned for 10 matches following the 2015 incident. Photo: Andreas Hillergren/TT
Jakob Lilja, who played for Swedish professional club Rögle at the time, struck Malmö's Jens Olsson across the neck with his hockey stick during a game in March 2015.
Olsson was stretchered off the ice but did not suffer any serious injuries. Lilja, 23, was banned for 10 matches for the incident.
Public prosecutor Michelle Stein said that the violence of the attack warranted a probe, without revealing why the preliminary enquiry had taken so long.
“When you're a high level athlete you can accept a certain amount of violence but there is a limit,” Stein told TT news agency.
“It's a blow, called cross-checking, in the back, which has nothing to do with the game.”
She added: “There is sufficient evidence for a conviction.”
Lilja, who now plays for Linköping, faces a sentence of up to two years in jail.
“Obviously I think it's regrettable that the case has gone so far,” he told TT.
Url copied to clipboard!