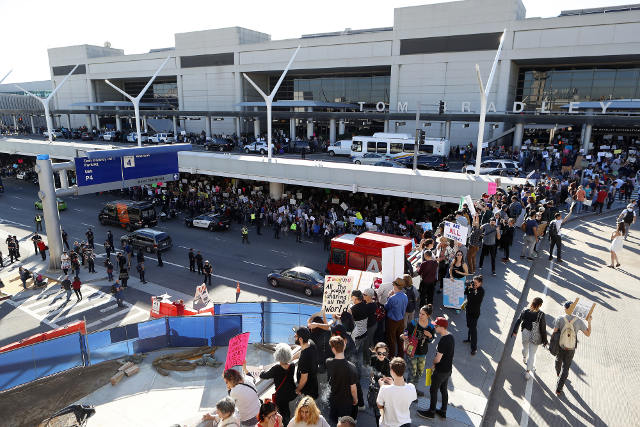 The US President's executive order banning people from seven predominantly Muslim countries from entering the US for 90 days has created confusion over what the decision means for those with dual nationalities, not least in Sweden.

But it seems little was resolved, with the Swedish representatives urging the US Embassy to clarify what the rules mean for Swedish citizens holding dual citizenship with one of the countries covered by the ban as soon as possible.

“We asked them for clarification about what this will mean in the future, what the circumstances are. But we haven't received any answers actually. I think they are waiting as much as we are for the central government to clarify what the meaning is. They will get back to us when they have more information,” UD's press department told The Local in a statement.

UD added that they have been contacted by some Swedish citizens who were experiencing travel problems caused by the ban, but it was difficult to provide concrete answers to them:

“We have had a couple of telephone calls from Swedish citizens who have been having a bit of a problem. To be honest, right now we don't have a lot of answers. Basically, we recommend Swedish travellers contact the US Embassy in Stockholm.”

Both Scandinavian Airlines (SAS) and Norwegian operate direct flights from Sweden to the US. The SAS press department said there were some cases of passengers being refused entry to the US on the first day of the ban last weekend, but it was impossible to know whether the entry ban was the reason for that, as the US authorities do not give them information on why a traveller was rejected:

“We had a couple of cases on the first day, but we never know if it's because of this or something else. When you check in you get an OK or you're denied boarding, and that's something the US authorities automatically tell us through their system. So if a passenger is denied, we never know the reason, whether it's because of the new rule, or the passport is expired etc.”

SAS and Norwegian said that any passengers who booked their ticket to the US from Sweden before the regulations started on January 28th and are now unable to carry out the journey would have their tickets refunded.

“In that case they'll get a refund. If they are denied to travel to the US because of the ban, they will get a refund,” Norwegian's Swedish press officer Charlotte Holmbergh Jacobsson said.

If a passenger somehow manages to travel on a flight to the US despite not being valid for entry to the country – as could have been the case if a passenger was in transit while the rule change kicked in – then it is up to the airline to return them to their origin, she explained:

“Usually you won't even be able to check in at the airport, and most likely you will also be informed about that before you even go to the airport. If you happen to get on board the aircraft, the US immigration controls prevent you from entering the US upon arrival. Then we need to bring that passenger back.”

On Monday the US Embassy in Stockholm advised nationals of Iraq, Iran, Libya, Somalia, Sudan, Syria and Yemen not to attend visa appointments even if they had already been scheduled, as they would “not be permitted entry to the Embassy/Consulate”.

Article by Lee Roden and The Local contributor Christian Krug.