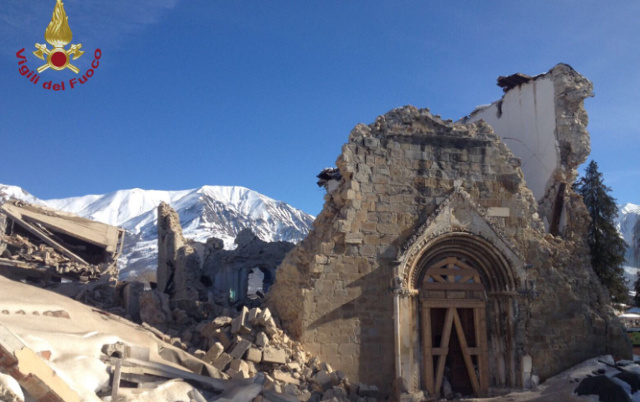 The quake hit the Lazio region at around 6:10am on Sunday with its epicentre in Amatrice, leading to new damage in the town.

Most significantly, the right wall of the town's 15th-century Sant'Agostino Church was completely destroyed, leaving only the facade of the building still standing.

After today's tremors, collapses in in Amatrice the right wall of Sant Agostino Church. No people involved.

Amatrice was the town worst hit by a major earthquake on August 24th last year. Most of the 299 victims were residents of or visitors to the small town, which was due to hold its local festival the weekend after the quake took place.

The Church of Sant'Agostino was one of many historic buildings damaged in that tremor, losing around half its facade in the quake. Its bell tower collapsed at first partially, then completely in subsequent earthquakes.

Heavy snowfall hampered recovery efforts in the region last week, where five months after the earthquake, the temporary accommodation has still not arrived.

The video below, shot by an emergency services drone, shows the snow-covered wreckage.

In 2015, the town was voted one of Italy's most beautiful, and is known locally as the 'town of the hundred churches'.