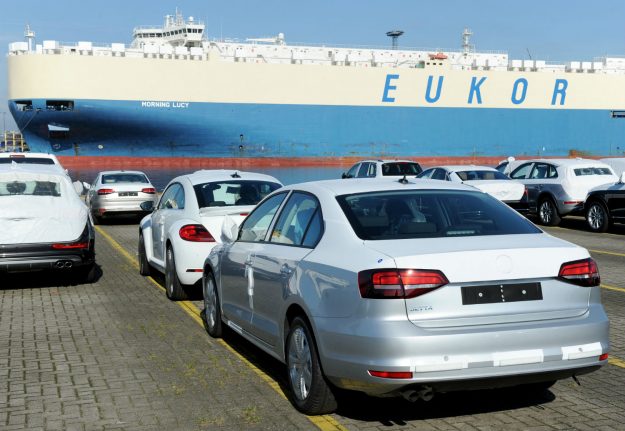 “Germany’s trade balance shows an estimated plus of $297 billion,” Christian Grimme of the Ifo Institute told Reuters on Monday.

That number shows that Germany made almost $300 billion more from selling goods and services to other countries than it spent on imports during 2016, giving it a higher trade surplus than China.

The Asian giant came second on the Munich-based think tank’s list, recording a balance of trade of $245 billion. Japan had the third highest trade surplus.

In 2015, China had the highest balance of trade, followed by Germany in second.

According to the Ifo Institute, exports of goods such as cars and chemicals had a particular impact on the German trade surplus.

The Ifo report also estimates that the USA had the largest trade deficit in the world in 2016, spending $478 billion more on imports than it earned from exports.

“That means that the USA is buying much more than it is producing and is going into debt abroad,” said Grimme.

The Ministry for Economic Affairs states that 44 percent of Germany’s budget surplus is attributable to sales to the USA and Great Britain.

1.6 million German jobs threatened by trade war with US

But the potential for an escalating trade war with the US could put the dampers on Germany’s export success, leading economic experts have warned.

“We are facing a trade war with the USA – we must face the hard reality,” Marcel Fratzscher president of economic think tank DIW told the Frankfurter Allgemeine Zeitung (FAZ) on Sunday.

“If Donald Trump means what he says, that’ll have a negative effect of global wealth.”

The Ifo Institute has also warned that millions of German jobs could be threatened by a Trump presidency.

“In total 1.6 million German jobs would be in danger if economic relations with the USA were taken down to zero,” Ifo president Clemens Fuest told FAZ.

The institute claimed that a million positions at German companies which sell to the USA would go, plus 600,000 jobs at US companies with offices in Germany.

“If there were an escalation with counter measures from Europe, jobs at American companies in Germany would also be in danger,” said Fuest.

The new US President has already threatened to impose sanctions on Germany’s beloved car industry, saying he is prepared to impose tariffs on luxury car maker BMW if it continues construction of a planned factory in Mexico, rather than the US.

Dennis Snower president of the Institute for the World Economy in Kiel said that the situation reminds him of the interwar period when trade conflicts threatened to bring down the global economy.

“Everyone has taken their lessons from that bitter experience – even Donald Trump. We live in a time when the continuation of the liberal world order is in question.”