On Holocaust Memorial Day, we look at one of the small but powerful ways victims of the genocide are remembered in Italy and other countries.

Italy marks International Holocaust Remembrance Day on January 27th with hundreds of memorial events in towns and cities across the country.

Though many initiatives move online in 2021 due to the pandemic, new 'Stolpersteine' memorials are set to be unveiled to small groups in Rome and Milan.

Here's a closer look at what these tiny memorials are, and where you can find them in Italy.

You might walk the same route for weeks, months or years before noticing the Stolpersteine – small golden squares nestled among the city's cobbles.

Each of these stones is a memorial, summing up a life in very few words, haiku-like in their simplicity.

In Rome's Via Piemonte, not far from the Villa Borghese park, two such stones can be found outside a fancy office block.

These stones form just a tiny part of a project that's been running for more than 20 years, spanning eight countries, with over 40,000 stones, including almost 200 in Rome and dozens in other Italian cities. Turin was the site of the 50,000th stone to be laid – for Eleonora Levi.

Each one commemorates a Holocaust victim, with a simple inscription on the gold-plated stone outside the person's former home.

The artist behind the project, Cologne-born Gunter Demning, wanted to give back a name to the victims who had been reduced to a number, returning them symbolically to the home and neighbourhood that was snatched from them.

They are called Stumbling Stones, Stolpersteine in German, because the idea is that you literally stumble over the slightly raised cobbles, and are forced to remember. Demning says that stooping down to read the details is a kind of bow of respect to the victims.

READ MORE: 20 years of remembering the Holocaust on German streets 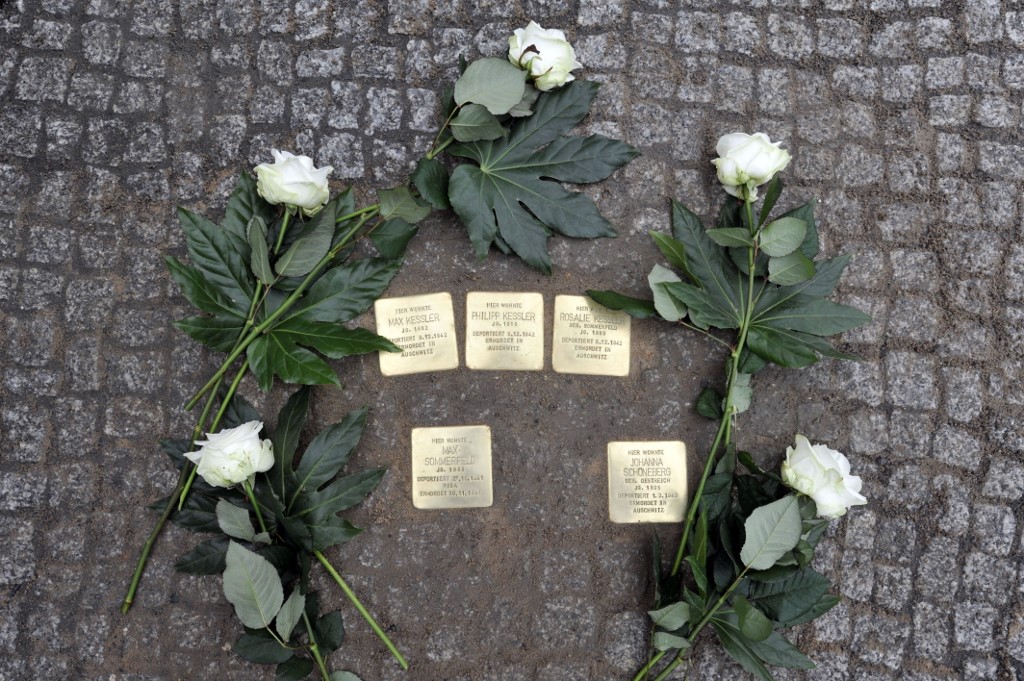 Today, the apartment block where the Alatri's lived is an office building. It's in one of Rome's priciest districts, full of businessmen in suits who seem to be in too much of a rush to notice two golden cobblestones.

The Arte in Memoria exhibition is a biennial of contemporary art on the theme of memory, shown in the ruins of the Ostica Antica synagogue – its ninth edition opened this week, and some of the works from each show remain on permanent display. Again, the idea from this initiative was born in Cologne, where a similar project began in the city's Stommeln Synagogue.

Through the Arte in Memoria project, I learned more about the Alatri family. Lionello, a shopkeeper, had dedicated much of his life working for Jewish institutions, and helped many Jewish refugees who fled to Rome from countries under Nazi control.

He was forced to resign from his textiles business once Italy's racial laws came into force. Shortly afterwards, he and Evelina were taken from their home and deported to Auschwitz. After the week-long journey, they were judged unfit to work on arrival, and were both gassed to death.

On a family history website set up by one the Alatris' descendants, you can read a copy of the last letter Lionello wrote, which was thrown out of the train window and later found by a railway worker. Most of it is very matter-of-fact, and even optimistic. It opens with the words 'We are leaving for Germany' and goes on to explain how much the landlord was to be paid each month for light and gas bills, and various other financial affairs to be put in order.

He tells the reader 'I ask whoever finds this letter, for the sake of humanity, please do these things. Keep courage, like we are.' The letter ends with a sudden burst of emotion: 'I am dismayed.'

A version of this article was originally published in 2013.