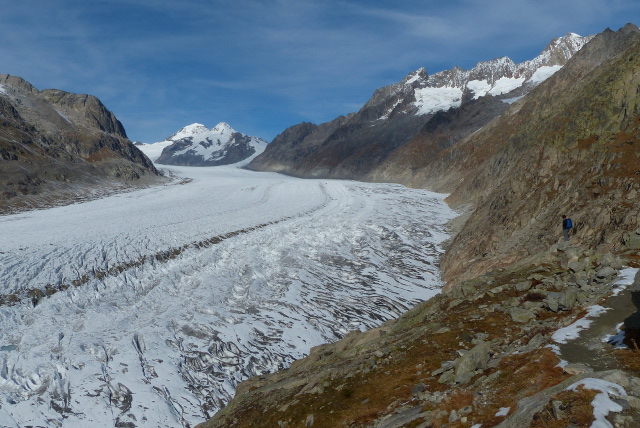 Photo: Caroline Bishop
Researchers have used a new dataset to confirm a direct link between the melting of Europe’s longest iceflow in the Swiss canton of Valais and the slippage of the adjoining Moosfluh slope at a rate of around 30 centimetres a year.
The land at Moosfluh has been moving for years, and last September the cablecar was forced to stop operations due to the movement of the ground.
Now, a long-standing project by scientists at ETH Zurich has proved the slippage is connected directly to the melting of the glacier “and thus to climate change”, the university said in a statement.
Researchers used various measuring instruments including scanners, radar and GPS, and studied historical and satellite data to come to their conclusions.
“Based on our years of measurements, we were able to detect a critical threshold in the shrinkage of the glacier at which the situation rapidly deteriorated,” said former ETHZ geologist Andrew Kos.
That threshold was in the 1990s when the Aletsch glacier began melting at a much faster rate.
That in turn accelerated the movement of the adjoining slope, though with a nine-year time lag, according to researchers.
Prior to 1995 Moosfluh moved at an average rate of less than one centimetre a year; after that point it began moving at 30 centimetres a year.
The number and volume of rockfalls in the area has also increased, another sign that the land is increasingly unstable, said researchers.
Though scientists have long known that the glacier was shrinking, the rate at which it is happening has surprised them.
“For geologists, the speed with which events on the Moosfluh have developed is extreme,” said the report’s co-author Florian Amann.
At 23km in length, the Unesco-protected Aletsch glacier is the longest iceflow in the Alps.
In 1860 the glacier was around 3km longer and its upper edge was 200m higher than it is now, according to the area’s tourist body.