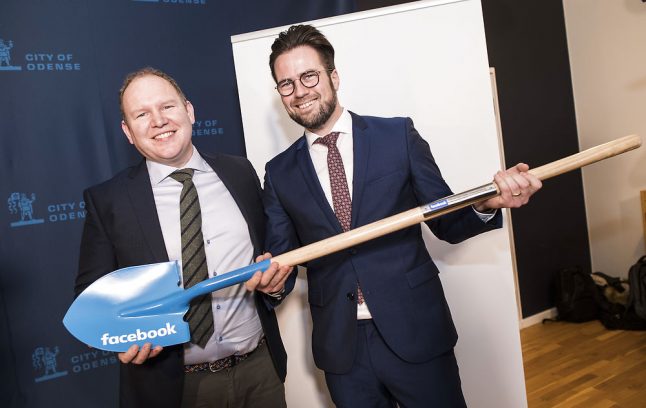 Facebook Director of Data Niall McEntegart presented Odense Odense Mayor Peter Rahbæk Juel with a symbolic shovel. Claus Fisker/Scanpix
The data centre will result in at least 150 permanent jobs and as many as “a couple thousand” jobs in the construction stage, Facebook's director of data, Niall McEntegart, said at a joint press conference with Odense Mayor Peter Rahbæk Juel.
“Odense is not just a great site for a data centre. It’s also a great city that we look forward to living in,” he said.
See also: Five reasons Odense is actually Denmark's best city
“Our mission at Facebook is to connect the world and our data centres house the infrastructure that make it possible to connect billions of people,” McEntegart said, adding that the 55,000 sqm Odense facility would help the social media giant handle “the richer content” of live videos and 360-degree photos.
He said the Odense centre, which will be just Facebook's third outside of the US, would be “one of the most advanced, energy-efficient data centres in the world” and powered completely by clean and renewable energy.
The Facebook announcement was the culmination of three years of preparations, the Danish Foreign Ministry said.
The social media’s investment in Denmark comes shortly after rival Apple announced that it would build one of the world’s largest data centres in Viborg. Apple has also committed to “fund and boost” an expansive biogas research project at Aarhus University.
“I am very happy that Denmark has managed to attract yet another big foreign direct investment. Although only 1 percent of all companies in Denmark are foreign, they are responsible for 20 percent of all Danish jobs,” Foreign Minister Anders Samuelsen said. “For this reason, the Danish government works continuously to attract more foreign investments to Denmark.”
McEntegart told local news site Fyens.dk that Facebook's investment will amount to “hundreds of millions of dollars” but declined to give a specific figure.
Naturally enough, Thursday’s announcement in Odense was livestreamed on Facebook by Fyens.dk and can be seen in its entirety here: