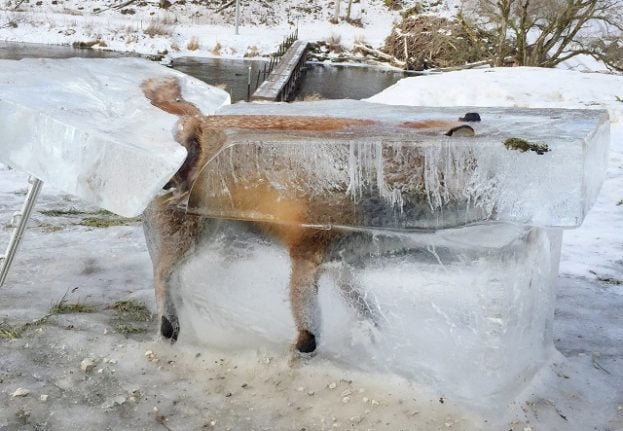 Hunter Franz Stehle  from Fridingen, Baden-Württemberg told DPA on Friday that he discovered the fox at the beginning of the year by the Danube. He assumes the animal was walking on ice over the river when it broke through, drowning the fox and then freezing in an ice block.

“We sawed out the ice block with the fox on January 2nd and as a reminder exhibited it in the courtyard of the hunting house,” Stehle said.

The ice had apparently not been able to withstand the animal's weight, having weakened thanks to a slight increase in temperature, so the unfortunate fox fell into the water and drowned.

Stehle sawed out the ice block to let it thaw.

“The ice fox is a warning to anyone who thinks about going out on the ice of the frozen Danube,” Stehle told the local Schwäbische Zeitung. He added that the beast's fur would not be usable after such a long time frozen.

It's not the first time the hunter has spotted a frozen animal during periods of winter weather.

“Once I discovered a frozen deer, and have found wild boars three or four times in the past 40 years,” he said.

A photo of the frozen fox has since gone viral and been picked up by international media, including BBC News and ABC.

Drowned fox encased in block of ice on display in German town to warn of the dangers of stepping onto frozen lakes. https://t.co/1q8TmlNfKc pic.twitter.com/YYCtkdf0cy

Germany has been gripped by cold weather all week, with heavy snowfall, and storm Egon sweeping through the country on Friday.

Two drivers were killed in weather-related accidents, and thousands were left without power.