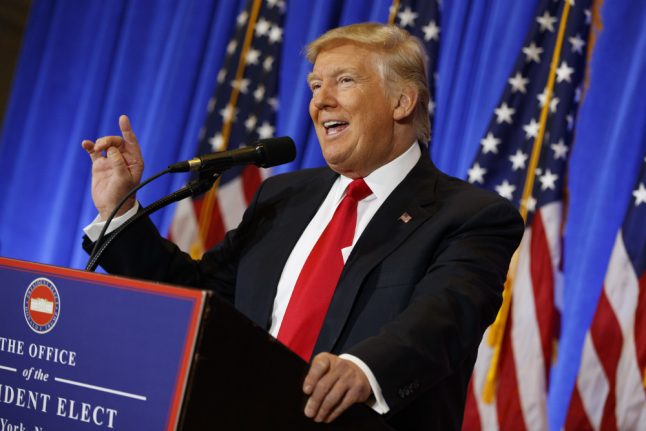 Donald Trump at his press conference on Wednesday. Photo: AP/dpa

German pharmaceutical and biotech stocks were particularly impacted by Trump’s statements on Wednesday, and Germany’s DAX dropped by 0.59 percent within the first hour of trade on Thursday morning.

Chemical giant Bayer had fallen by about 0.68 percent from the previous day as of 11am on Thursday, while Merck had dropped by about 1.96 percent.

“As was to be expected, this put great pressure on the health sector, in particular biotech,” the trader said.

On the TecDAX index, biotechnology shares of Evotec, MediGene and MorphoSys lost between 1.7 and 4.5 percentage points. Medical supplies company Fresenius Medical Care had dropped by about 1 percent as of Thursday at 11am.

The European pharmaceutical sector was the weakest on the Stoxx 600 with a drop of 2 percent.

“The Trump speech last night did not deliver the hoped-for stimulus,” one trader told Dow Jones.

Trump said at his press conference in New York that he would make the pharmaceutical industry bid for government contracts.

“There's very little bidding on drugs. We're the largest buyer of drugs in the world. And yet we don't bid properly. We're going to start bidding,” Trump said.

US law currently does not allow federal insurance programme Medicare to negotiate drug prices, essentially allowing the pharmaceutical industry to set their own drug prices.

“They’re getting away with murder,” Trump said about the industry. “Pharma has a lot of lobbyists and a lot of power and there is very little bidding.”

The trend was also replicated on stock markets across Europe on Thursday morning, with pharma firms also underperforming in Denmark, Spain, France, Switzerland and Italy.