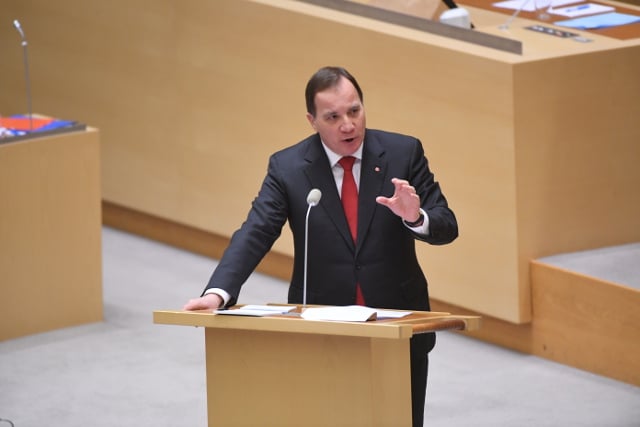 Sweden saw a number of high profile cases of hand grenade blasts in 2016, including the tragic story of an eight-year-old boy from Birmingham, who was killed when a grenade was thrown into a Gothenburg apartment in August.

On Wednesday Löfven said the punishment for carrying one of the weapons will be quadrupled, and harsher penalties for weapons-related crimes in general brought in.

“We are now tightening the punishment for weapon crimes. Those who go out with a weapon should know that it could be several years before they are allowed to see their family outside of a prison again,” the PM told the Riksdag.

“In our way of building communities, organized crime will be thrown off our streets and into prison,” he added.

Hand grenades are currently classified as “flammable and explosive products” rather than weapons under Swedish law, meaning negligent use of them carries a maximum punishment of four years in prison.

In December, the Swedish Government proposed that illicit use of grenades and other explosives should instead be subject to the same penalties handed out for gun and weapon crimes. The law change is expected to come into force in July 2017.

Löfven also noted in his speech that “many will remember 2016 as a year of fear”, but pointed out that in Sweden the economy is performing well and school results have started to turn around.

The co-leader of Sweden’s Greens, who are part of a coalition government with Löfven’s Social Democrats, also touched on crime in his address.

“The creativity of young people should be put to use in a work place, not the criminal world,” Gustav Fridolin said.

Opposition Moderate leader Anna Kinberg Batra spoke about insecurity, terrorism and an uncertainty in the world in her speech to the Ryksdag, before turning to the subject of unemployment.

“We must stop pandering to those who take it upon themselves to live off others when they could work,” she said.

The leader of the far-right Sweden Democrats meanwhile chose to start his speech by “welcoming the popular uprising against the liberal establishment” in Europe.

Jimmie Åkesson also criticized the Swedish Government for failing to address problems like long waiting lists in the health service, unemployment and crime.