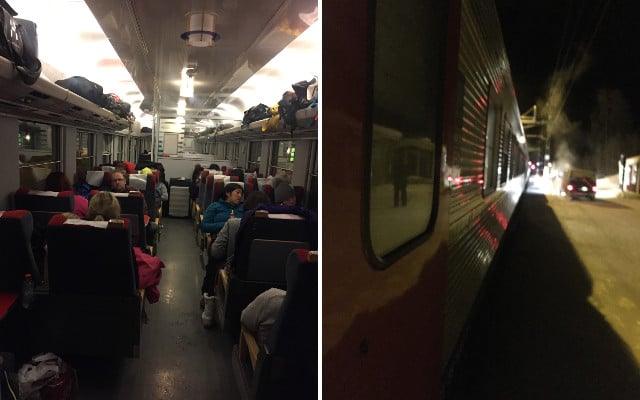 The train, which left Kiruna at 2pm was supposed to reach Luleå further south at 6.20pm. By 6.30pm it had only completed two thirds of its journey however, before coming to a halt near the village of Nattavaara, around 170 km away from its final destination.

Sweden is experiencing a particularly cold week, and the temperature in the area eventually dropped to minus 38 degrees. To make matters worse, the power was lost on the train, meaning the heating stopped working for three hours.

In some places that would be enough to cause a riot, but for the most part, the passengers appear to have been remarkably calm.

“People were pretty relaxed. Us northerners are warmer than the cold up here,” Luleå resident AnnaLeena Larsson, who was on the train, told The Local.

“I was also lucky enough to be on one of the warmer carriages, there were other ones that were a lot colder and people didn’t have the right clothing on, so we went and got them and told them to come and sit in ours,” she added.

“My god, it’s nothing to get stressed about. Though my patience did start to wear thin once the 12 hour mark approached,” said fellow passenger William Degerbjörk, who was unfortunate enough to have been on the train for a large stretch of the journey before it broke down.

Don’t let that stoicism fool you though, the conditions weren’t exactly fun:

“We had no electricity at all, so the toilets didn’t work and there was no water left as everything froze. Outside the temperature was about -38C, so going out to use the toilet wasn’t appealing!” he explained. An image from the train early in the morning. Photo: AnnaLeena Larsson.

The response of the locals in Nattavaara made matters easier. The village mobilized and eventually managed to get passengers transported to warm buildings, with access to food and drinks.

“The village put together a sort of crisis response. The Swedish Church helped, people were shuttled over to a shop which opened up, and people could get warm tea and sandwiches. We were well taken care of,” Larsson explained.

“The people in the village were wonderful and really came through for us. They opened up the kiosk in the village for everyone on the train, which was about 150 people, and even came with cars to transport us there,” added Degerbjörk.

The travellers did eventually get to Luleå just before 6am, where they were provided with hotel rooms by train operator SJ if required. But how will the whole thing shape the prospect of future train journeys?

“I travel a lot for my job, so I have to choose between the car or the train. I’ll have to think about which method I use now…” Larsson pondered, before adding “SJ’s trains are usually reliable”.